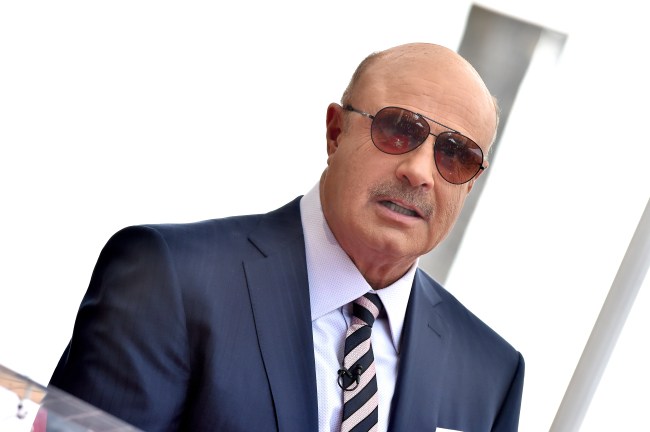 Your mother’s favorite television psychologist has a rabid case of cabin fever and is at his wits end with this whole isolation racket.

Dr. Phil McGraw appeared on Laura Ingraham’s show on Fox News Thursday night spoke about the long-term externalities of shutting the country outweighing the carnage from a global pandemic.

There isn’t a soul out there who would argue that stay-at-home orders are awful for the economy on both a micro and macro level, but Dr. Phil really sounds like a Mr. Phil when he spits out statistics that just aren’t accurate and conflating unrelated arguments.

“250 people a year die from poverty and the poverty line is getting such that more and more people are going to fall below that because the economy is crashing around us. And they’re doing that because people are dying from the coronavirus. I get that,” he said. ““But look, the fact that the matter is we have people dying, 45,000 people a year die from automobile accidents, 480,000 from cigarettes, 360,000 a year from swimming pools, but we don’t shut the country down for that. But yet we’re doing it for this? And the fallout is going to last for years because people’s lives are being destroyed.”

A lot to digest here, but we’ll start with 300,000, not 250, people die each year from poverty and around 3,500 Americans, not 360,000, die annually from unintentional drownings, not just in swimming pools, according to CDC. And this is without even mentioning the fact that car crashes and drownings are not contagious.

The next time someone cites Dr. Phil, Dr. Oz or any TV doctor’s talking point that COVID-19 is merely the “flu” or like “car accidents” (a blatant red herring argument), just point them to the below chart. It unmasks the deadly rhetoric. pic.twitter.com/6Mq3pX5uw1

Phil’s comments undermining the severity of the pandemic drew criticism from all corners of the internet, with many calling into question the entertainer’s character.

In1988, the Texas State Board of Examiners of Psychologists determined that he had hired a former patient, without "proper separation between termination of therapy and the initiation of employment."

7) and also for violating doctor-patient confidentiality regarding Britney Spears.

9) Despite not being a medical doctor, he started selling weight loss shakes in 2003. The name of the shakes was "Shape It Up, Woo, Woo!"

11) In other words: He's an entertainer. Maybe even a skilled one! But he's not a doctor. He's not even a licensed psychologist anymore. He's DEFINITELY not an epidemiologist.

12) In conclusion, Lucy from Peanuts is probably a better authority on viruses right now.

I once caught a car crash from my best friend, who already had car crash and didn’t tell me and we went and shared popcorn at Every Which Way But Loose and then I got car crash bad and Dr. Phil isn’t a medical doctor or an economist. https://t.co/8jHt2ZyZGp

Fun Fact: Do you know how Dr. Phil made his money before TV?

He would advise corporations on which jurors to pick when they were sued to guarantee outcomes, including our friends at Exxon. It’s called litigation psychology. Great guy. https://t.co/ZG6wNIj7rC

Dr Phil isn’t an MD, he has a PHD in clinical psychology.

Friendly reminder that "Dr." Phil is not a medical doctor. He calls himself a doctor because he has a Ph.D. in psychology. It's irresponsible to put someone on TV, introduce him as "Doctor," let him talk about public health, and not make clear he's no M.D. https://t.co/7qXBTvHXLM

Con artists like Dr. Oz and Dr. Phil have always offered magical solutions that were too good to be true and harmed the people who fell for it. It’s just that in times like this, the stakes are higher, and the fraudulent nature of their magical solutions becomes more obvious.

A wonky delivery from Dr. Phil, for sure. But we should be careful about throwing the baby out with the bath water here.

Considering the long-term negative effects of obscene unemployment and subsequent increase in depression and who knows what, it shouldn’t be considered immoral to consider a pragmatic approach over the “PEOPLE ARE DYING!” crowd. Corporations put a price tag on people all the time. I think everyone would just prefer this plan coming from a real doctor.