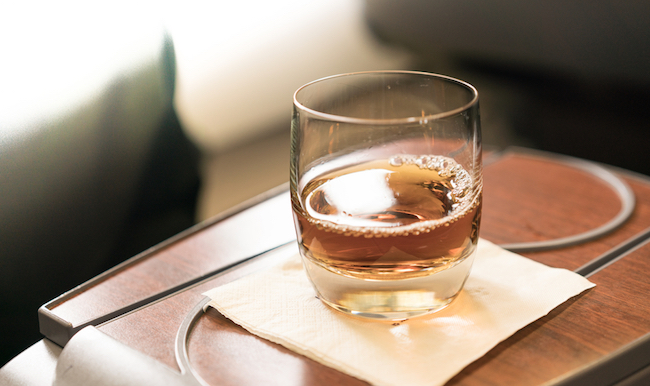 Back when I was in college, I was getting ready to head down to Florida for spring break when I realized there was no way I was going to be able to pay for all of the drinks I would need to buy on the flight in order to catch the buzz I’d be responsible for maintaining over the course of the following week. Faced with this terrifying prospect, I headed to the liquor store to raid the container of $1 nips next to the register and ultimately filled my quart-sized bag of liquids to the brim with SoCo Lime and off-brand gin.

I came the closest I’ll ever come to knowing what it feels like to try and get drugs through airport security when I passed my carry-on through the X-ray machine, but the TSA agents lived up to their famously apathetic reputation and I boarded the plane with my valuable bounty in tow. I think the flight attendants figured something was up when I asked for three cans of tonic water and nothing else over the course of the trip but I managed to hit the perfect level of drunk and exit the plane without any problems.

After doing a little bit of research, I realized there was one small problem with my travel hack: it was a violation of federal law. It’s apparently illegal to serve yourself booze during a flight, but according to travel expert Gilbert Ott, you can get around this pesky rule by asking the flight attendants to serve you whatever alcohol you brought along.

There’s no guarantee the crew will honor your request (especially if you hand them eight tiny bottles of liquor when you board), and if you decide to eschew the hard stuff in favor of a bottle of wine, you’ll have to finish the entire thing before landing (which could be viewed as a negative or a positive) or else the remainder will be thrown away.

You can still skirt the law by pissing off your neighbors by heading to the bathroom too many times over the course of your trip, but if you wanted to avoid attracting the attention of an air marshall who’s looking for something to do while waiting for a terror attack that will probably never come, this strategy is probably your best bet.