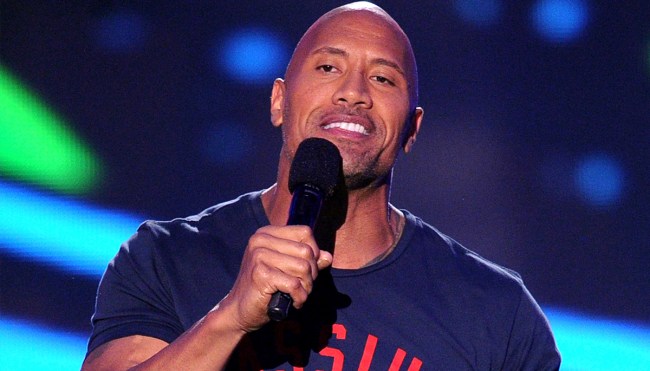 There is perhaps no professional wrestler in the history of the WWE who personifies the “Superstar” label bestowed upon its athletes quite like Dwayne “The Rock” Johnson.

After playing football at the University of Miami, Johnson decided to follow in the footsteps of his father and grandfather by pursuing a career in the squared circle. After making his grand WWE debut in 1996, he quickly climbed up the ranks on his way to becoming one of the biggest names in the Attitude Era before eventually deciding to take his talents to Hollywood.

It’s safe to say that pivot worked out pretty well for him, as Johnson—with the help of his trusty co-star Impossibly Large Muscles—has become one of the most bankable actors on the planet over the past couple of decades. At this point, it feels like there’s nothing the man who’s repeatedly teased a run for president can’t do—and on Friday, we were treated to more proof that’s the case after he made his debut as a rapper.

Over the years, the WWE has featured a number of wrestlers who used rap as a gimmick—including John Cena, who was originally marketed as a “Doctor of Thuganomics” before adopting a persona of a guy who loves jean shorts as much as he loves America.

Cena’s skill on the mic might’ve left a bit to be desired, but the same can’t be said about Johnson’s ability to spit some seriously hot fire.

On Thursday, he teased he’d be hopping on a song with Tech N9ne.

Pumped (& humbled) to drop MY 1ST RAP SONG with my brothers, the GOAT @TechN9ne🐐 @therealkingiso & #joeycool

Honored to add some Rock gasoline⛽️💪🏾 to their FIRE🔥

It turns out a snippet from the track “Face Off” had already surfaced prior to that reveal, and based on the preview, Johnson can more than hold his own in the booth.

It’s Dwayne Johnson’s world and we’re all just living in it.