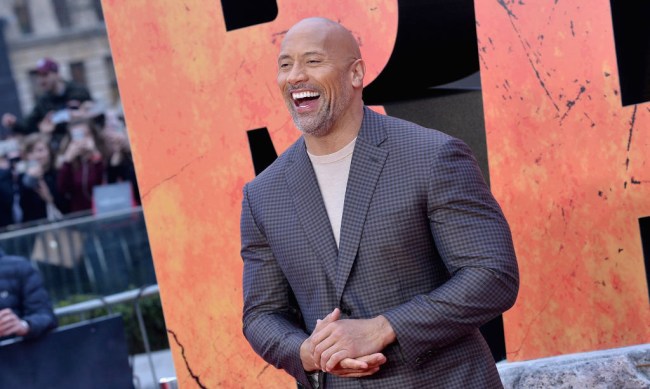 Dwayne ‘The Rock’ Johnson is one of the busiest men in Hollywood. That’s what happens when you’re the #1 actor in the business and pulling in $65 million a year for movies. You have to be everywhere, all the time, always on the move. It’s pretty remarkable that he even has the time to notice when fans reach out to him on social media let alone the time to respond.

Katie Kelzenberg is a Stillwater Area High School senior who has gone viral after asking Dwayne ‘The Rock’ Johnson to prom. Not only did The Rock respond but he also hooked up Katie with an extremely special surprise…So, the first part of this video is Katie’s promposal, the second part is The Rock responding, and the third part is Katie’s surprise. It’s kind of hard to hear/see what’s happening in the third part so I’ve included a high-def version of that clip and it’s definitely worth watching the 2nd video because that’s where Katie’s big surprise comes in:

Here’s that high definition version of the third part of the clip:

I recently found out that Dwayne ‘The Rock’ Johnson is a somewhat divisive figure. A lot of people think that he’s always putting on a show for the camera for the betterment of his career…To that, I say ‘who the fuck cares if he is?‘ he just made this girl’s year. Why would anyone care if he got some good publicity out of it?