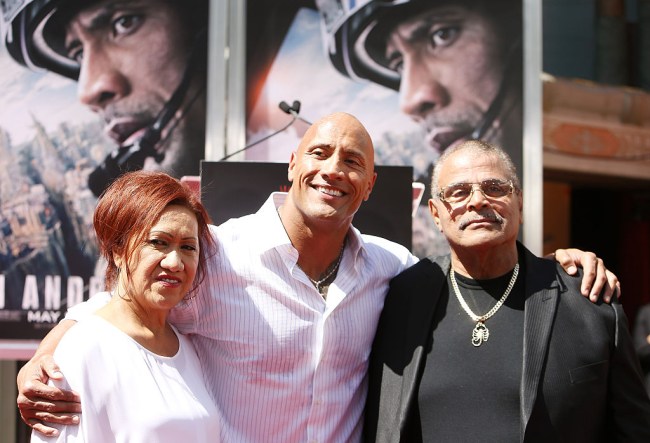 Dwayne ‘The Rock’ Johnson shared the powerful eulogy that he gave to his father, former wrestler father Rocky “Soulman” Johnson.

Rocky “Soulman” Johnson passed away from a heart attack on January 15 at the age of 75. Soulman, whose birth name is Wayde Douglas Bowles, was born on August 24, 1944, in Amherst, Nova Scotia, Canada. He started boxing and wrestling in his teens and later changed his name to Rocky Johnson in honor of boxing legends Rocky Marciano and Jack Johnson.

Soulman began his professional wrestling career in the 1960s with the National Wrestling Alliance, where he often used the name “Sweet Ebony Diamond.” The groundbreaking wrestler would become the first black Georgia Heavyweight Champion.

Rocky joined the WWE in the 1980s. In 1983, Rocky, along with his wrestling partner Tony Atlas, would become the first black champions in WWE history after defeating the Wild Samoans for the Tag Team Championship.

WWE Hall of Famer Rocky "Soul Man" Johnson, father of Dwayne “The Rock” Johnson, has passed away at the age of 75.

Soulman inspired his son Dwayne Johnson to become a professional wrestler, and at Rocky’s funeral, The Rock thanked his father for all that he did for him and the wrestling world.

Dwayne Johnson shared the emotional eulogy he delivered at his father’s funeral. Fighting back the tears, he paid homage to his “trailblazer” father.

Johnson said that he first found out about his father’s heart attack from a phone call from his wife, right as he was pulling into the production lot of the movie studio, on the first day of a film.

“I’m literally just pulling in, and I’m looking at the whole crew, hundreds of guys and women milling around, carrying equipment and waving at me in the truck, and I’m waving back, and it all got really foggy, and it seemed like it was a big dream,” he revealed. “You know how you have those moments where you try and shake yourself out of it, and you’re like ‘No, it’s not a dream. My dad’s gone.’”

“In that moment, I just thought, ‘Well, what do I need to do? What’s the next thing that I need to do?’ And I heard a voice say, ‘Well, hey, the show must go on,’ and that was my dad. That was my old man who told me that.”

“For my dad, when he broke into the business in the mid-60s and throughout the late 60s and into the 70s in the United States — where racial tension and divide was very strong,” Dwayne said. “And in the 60s and the 70s you have a black man coming in, it’s an all-white audience and all these small little towns that eventually I would go on to wrestle in — but at that time he changed the audience’s behavior and actually had them cheer for this black man.”

“When you think of my dad’s name, you think ‘hard work.’”

"My dad was a hero to me"@TheRock on his father Soulman Rocky Johnson as he inducted him into the WWE Hall of Fame in 2008.#RIPSoulman @JerryLawler pic.twitter.com/SUsC1yTK6d

You trail blazed and even harder, you changed people’s harsh behaviors toward a man of color.
Paving the way for me, my family and generations to come.
You loved us with the capacity of which you could – given all the givens.
Raised me with an iron hand and a tough complicated love.
A love that now, as a father and man, I’ve learned to refine as I raise my own children.
I wish I had one more shot.
To say one more thing.
You were taken too fast.
Slipped right thru my hands.
But you were so loved, lived so full, defined culture and now you rest high.
Peacefully.
And that makes my heart smile.
I love you and now I have an angel to call by name.
I’ll see you down the road, Soulman.
Til we meet again.
Your son