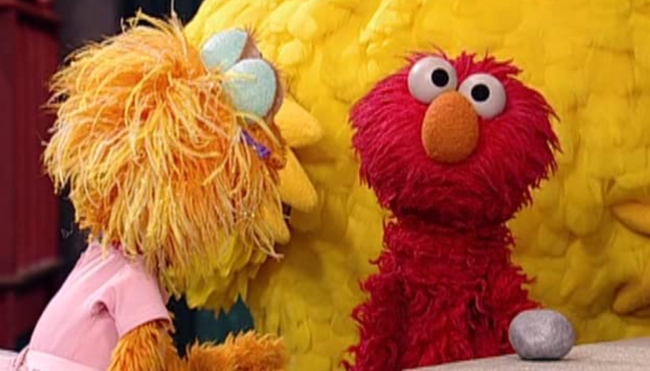 Do you know those times when you’ll get locked into something that you find inexplicably hilarious? Whether it be an underrated movie or an unknown YouTube video or an obscure Twitter thread? You’ll be giggling to yourself for minutes, if not hours, on end? That was me late last night as I discovered what the internet recently learned about Elmo: his seething hatred for Zoe’s pet rock Rocco. I was cackling like a hyena for a solid hour before I fell asleep last night as I found more and more examples of this long-running joke that the Sesame Street creative team had been sneaking by children for *years*

Here’s the long story short: Zoe, a three-year-old monster who first debuted on Sesame Street in 1993 and was apparently colored orange to complement Elmo, who was becoming wildly popular at the time, has a pet rock named Rocco. She talks to it, she tries to feed it, she celebrates its birthday — all the things that regular children do when they have an imaginary friend.

Elmo, however, is having absolutely *none* of it as his disgust with Rocco is routinely palpable. Whenever Zoe mentions Rocco, Elmo, at the least, rolls his eyes, and at the most, goes on a borderline unhinged rant. And it is legitimately comedic gold.

there are tears in my eyes y’all my stomach hurting pic.twitter.com/bbkF9yDZLf

This is actually one of my favorite Elmo clips…. pic.twitter.com/lUrkwJh8A8

Bro no why she keep fckn with Elmo 😭😭 pic.twitter.com/YW217q2bgp

DAWG! elmo has had enough with the shenanigans lol! i shouldn’t be laughing at this pic.twitter.com/Sp1uB8YpGo

Elmo let Rocco go swimming one time and he knew what was going to happen too pic.twitter.com/p068rz4ucz

The phenomenon has gone viral to such an extent that not only has the official Elmo Twitter account responded to the meme, but The Rock himself has also chimed in because nothing says true virality like corporate entities trying to get involved.

Has anybody ever seen a rock eat a cookie? Elmo is just curious.

Yes, my friend.
This Rock devours cookies.
All kinds of cookies 😈🍪
I’ll introduce you to #CheatMeals and it’ll change your life.
Tell Cookie Monster to move it over, cuz I’m coming to Sesame Street to kick ass and eat cookies.
And I’m almost all outta cookies.
~ Rock 🐂 https://t.co/BjlZciRqxU