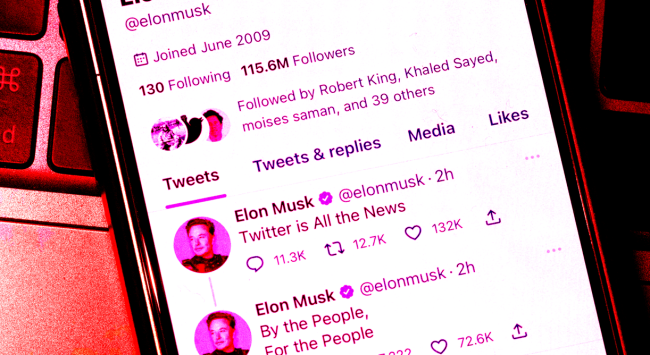 If Mark Cuban thought Elon Musk was turning Twitter into a “nightmare” last week, wait until he sees what has been happening this week.

Elon Musk has been mass firing Twitter employees who talked bad about him the company’s Slack and even made a disability joke about one of them on the way out.

Yes, it’s been quite a day.

Much of it began Tuesday morning when a Twitter account, @unusual_whales, wrote, “Elon has fired numerous employees who were critical of him on Twitter and the company’s Slack, according to Protocal.”

Being the true leader that he is, Elon Musk, of course, fired back with a smartass comment.

I would like to apologize for firing these geniuses. Their immense talent will no doubt be of great use elsewhere.

One of those fired Twitter employees, software engineer Nick Morgan, the tech lead of the Tweet Service, posted a photo of the email he received at midnight Monday night.

Gizmodo reports that Morgan had been working at Twitter for more than 11 years.

“My twitter account was protected at the time, so I can only assume this was for not showing 100% loyalty in slack,” Morgan wrote in a follow up tweet. “I’ve heard the same thing has happened to many others now.”

Two other Twitter engineers also tweeted they were fired for the same offense.

Looks like I just got fired for shitposting too✌️ https://t.co/G7MD2nzmMp

Musk has apparently been following all of the Twitter firings being posted on the account @libsoftiktok because he’s spending a lot of time commenting on their tweets. On one of them, Musk made a disability joke about the fired Sasha Solomon.

I’m a mother of a kid with Tourette’s. It’s not a punchline or a joke. It’s making fun of people. And it’s cruel.

All of this comes the day after Musk got into a Twitter fight with another longtime Twitter software engineer, Eric Frohnhoefer, who publicly disagreed with Musk over why Twitter was running slow in some regions.

I have spent ~6yrs working on Twitter for Android and can say this is wrong. https://t.co/sh30ZxpD0N

Twitter is super slow on Android. What have you done to fix that?

Sparing you all the rest of Frohnhoefer’s tweet replies to Musk, here they are in one image.

How to be the ultimate professional and still utterly destroy someone, a masterclass by @EricFrohnhoefer pic.twitter.com/mgUHJ0xLbH

Musk almost immediately tweeted out, then deleted, that he was firing Frohnhoefer.

Before the first round of layoffs, employees were reminding each other to keep their heads down and out of the way of Musk.

If they got laid off, they'd get severance. But if they pushed back against Elon? They'd get fired. No severance.

Guess it is official now. pic.twitter.com/5SRwotyD8J

Several of the employees fired overnight took to, you guessed it, Twitter to express their disappointment

Just woke up to the news that more Tweeps were summarily fired last night. At this rate no one will be left to run Twitter.

Welp that’s it for me folks!

If you ask me why exactly I really don’t know 🫡

“That’s it for me. 8.5 years as an SRE at Twitter and I’ve just been fired. I’m grateful to all my colleagues for getting to learn from and grow with you all. I’m proud of the thing we built. I’m sad to see what’s happened to it. Looking forward to taking a break,” another fired Twitter employee wrote.

After 12 amazing years and 3 weeks of chaos, I’m officially fired by Twitter.

I have a lot of stories to tell. But to my fellow (ex-)tweeps-#LoveWhereYouWorked 🫡 pic.twitter.com/lVWbqpcSXO

Oh, and don’t worry about Frohnhoefer. He appears to be doing just fine.

Thank. My LinkedIn account has never been more popular.

Eric, this thread is absolutely bonkers. We’re hiring senior and staff Android engineers at Reddit. We won’t treat you like this.