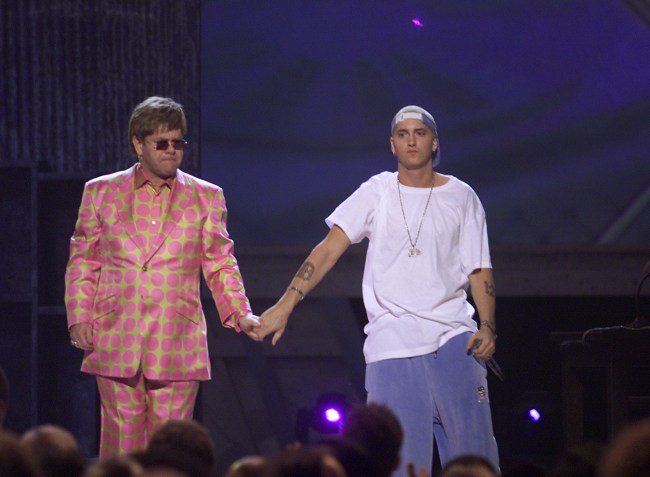 A new book provides intimate details of Eminem’s darkest days when he was taking copious amounts of drugs that nearly killed him, but he was saved in the nick of time by his friend Elton John.

A new book revealed the dangerous number of pills that Marshall Mathers was taking a day and the iconic rapper nearly died from a drug overdose. The Daily Mail has obtained shocking claims about Slim Shady in a new biography titled Not Afraid: The Evolution of Eminem.

Eminem suffered from an addiction to prescription drugs that sent him to rehab in 2005. “Some days I would just lay in bed and take pills and cry. I needed pills in my body just to feel normal, so I would be sick. It was a vicious cycle,” Eminem admitted.

During the peak of his drug addiction, Eminem said that he was taking 30 Vicodin and 60 Valium pills a day. Eminem also abused Ambien, Xanax, heroin, and methadone, which nearly killed him. In 2007, Eminem overdosed on methadone. “The doctors told me I’d done the equivalent of four bags of heroin,” Em said in 2013’s documentary How To Make Money Selling Drugs. “They said I was about two hours from dying.”

“My organs were shutting down. My liver, kidneys, everything. They didn’t think I was going to make it. My bottom was going to be death,” he explained. “The doctors told me I’d done the equivalent of four bags of heroin.”

Marshall’s recovery from opioids was helped immensely by Elton John according to the new book. In his new book Not Afraid: The Evolution of Eminem, author Anthony Bozza reveals how the unlikely friendship between the two music artists helped Eminem recover.

Legendary singer and pianist Elton Johnson was integral in Eminem’s rise from drug abuse. “As a fellow musical superstar with nearly 30 years of sobriety under his belt, Elton John was the perfect mentor to help guide Marshall,” Bozza writes in the book. “The two started on a program of weekly check-ins and grew very close.”

Elton has been 30 years sober after overcoming cocaine addiction in the 1980s. Slim Shady and Elton John performed a duet together at the 2001 Grammy’s.

The book also discusses twice-doomed marriages to Kimberly Ann Scott, the first of which happened in 1999 and ended in divorced by 2001. Mathers remarried Kim Scott in January 2006, then filed for divorce in April 2006. The on-again-off-again couple agreed to joint custody of their daughter Hailie.

Marshall Mathers chowed down on a diet of McDonald’s, Taco Bell, Denny’s, or Big Boy, but he gained a lot of weight. “I got so heavy that people started to not recognize me,” the 15-time Grammy-winning artist from Detroit said. “I got up to between 200 and 230, about 80 pounds heavier.”

The book’s preface is written by LL Cool J, who was Eminem’s “first childhood hero and inspiration.” Marshall Mathers first got to meet LL Cool J in 1999 and the Mama Said Knock You Out rapper told Eminem that he was blown away by his rap lyrics: “How can I be white/ I don’t even exist” from his song Role Model.

“The most important thing to remember about Eminem and his legacy, not as a rapper but as a white rapper is – he achieved the impossible – commercial, pop and critical success in a genre that was never intended to be a form of expression for the race,” Bozza said.

Bozza has written books about Artie Lange, as well as music-based books about AC/DC, Slash, INXS, and Tommy Lee. Bozza previously wrote a book in 2004 about Slim Shady titled Whatever You Say I Am: The Life and Times of Eminem

You can read the entire article at the Daily Mail.