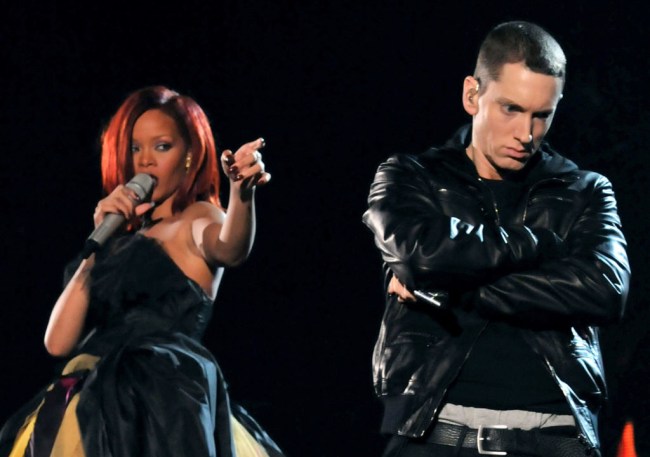 Nearly 11 years ago, the news broke that Chris Brown physically assaulted Rihanna. Now, a controversial verse from Eminem has leaked where he “sides with Chris Brown.”

In the reportedly leaked audio from the 2011 B.o.B. song Things Get Worse, Eminem’s verse supports Chris Brown attacking his then-girlfriend Rihanna. The verse was first leaked on the Eminem Reddit.

“Of course I side with Chris Brown, I’d beat a b*tch down too, if she gave my d*ck an itch now,” Eminem raps in the never-released verse.

There was no mention of Chris Brown or Rihanna in the final version of the track. But in the released Things Get Worse, Slim Shady raps that he “murdered” a 16-year-old Dakota Fanning and “put Natasha Bedingfield in a washer.” Eminem also dissed Angelina Jolie, Jessica Simpson, Carmen Electra, and his own mother in the song.

The verse was said to have been recorded during sessions for Eminem’s 2009 album Relapse. That was the same year that Brown brutally assaulted Rihanna. Her injuries were so severe that she had to go to the hospital and cancel her performance at the 51st Annual Grammy Awards on February 8, 2009.

On March 5, 2009, Brown was arrested on suspicion of making criminal threats and assault. On June 22, 2009, Brown pleaded guilty to felony assault and received five years of probation.

Despite siding with Chris Brown in the domestic violence situation, the self-proclaimed “Rap God” has collaborated with Rihanna on several songs: Love The Way You Lie, Numb, and The Monster.

This comes right after news broke that Marshall Mathers was visited by Secret Service for lyrics talking about murdering Ivanka Trump, the daughter of President Donald Trump.

Eminem often uses outlandish and violent lyrics about attacking popular celebrities to stir the pot and snatch publicity for his hip-hop projects.

“But I may fight for gay rights, especially if they d*ke is more of a knockout than Janay Rice/ Play nice? B*tch I’ll punch Lana Del Rey right in the face twice, like Ray Rice in broad daylight in the plain sight of the elevator surveillance/ ’Til her head is banging on the railing, then celebrate with the Ravens.”

“B*tch, shut the f*ck up and get in my car / And suck my f*cking d*ck while I take a sh*t / And I think with my d*ck so come blow my mind / And it tastes like humble pie / So swallow my pride, you’re lucky just to follow my ride/ If I let you run alongside the Humvee/ Unless you’re Nicki, grab you by the wrist, let’s ski/ So what’s it gon’ be/ Put that sh*t away, Iggy/ You don’t wanna blow that rape whistle on me. Scream! I love it / ‘Fore I get lost with the gettin’ off.”

Here are more of Eminem’s most controversial lyrics.