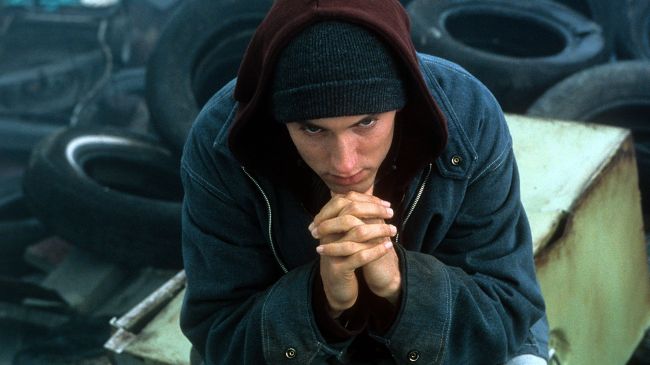 I was born in the year 1993, which means Eminem first started to cross into my consciousness around the year, I don’t know, 2000ish. What I remember most about Eminem in those early days is that — similar to South Park and Marilyn Manson — he was being blamed for the bad behavior of children, as if he and his music were the cause of rebellion and not just typical youth and/or bad parenting.

The perception would go on to change a bit in the early 2000s, with Eminem becoming arguably the world’s most popular music artist. He was so popular, in fact, that not only was a movie about his origin story made but he was chosen to star in it. That film, of course, was 8 Mile — which, against all odds, is actually a legitimately *good movie*.

8 Mile came out in 2002, which means it’s almost been 20 years since Eminem last dipped into the acting side of entertainment. That’s all set to change, though, as the 48-year-old Detroit legend has been cast to star as FBI informant Richard Wershe Jr., more famously known as White Boy Rick, in 50 Cent‘s upcoming Starz series Black Mafia Family. He’ll appear in just one episode, though.

“I’m honored and appreciative of my good friend Em for supporting my new show ‘BMF,’” Curtis “50 Cent” Jackson said in a statement. “We couldn’t do a show based in Detroit without incorporating the legend that is Eminem.”

“BMF” is inspired by the true story of two brothers, Demetrius “Big Meech” Flenory and Terry “Southwest T” Flenory, who rose from the streets of southwest Detroit in the late 1980s and gave birth to one of the most influential crime families in this country. The Flenory Brothers were the real ones; White Boy Rick just got a lot of the media attention. [via The Wrap]

In addition to Slim Shady, fellow hip-hop icon Snoop Dogg — who low key pops up everywhere — is set to appear as a recurring guest star.