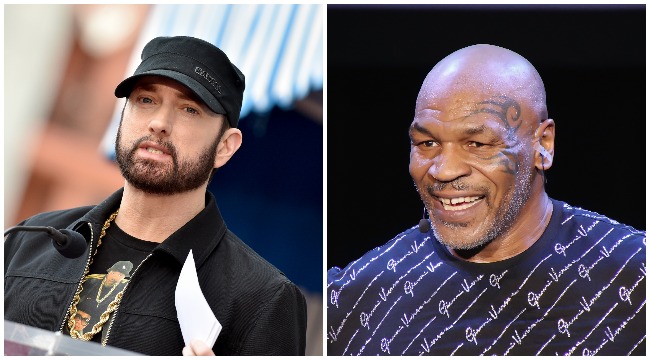 I’m not sure I’ve ever clicked on anything faster than the video of Eminem’s recent sit-down with Mike Tyson. Maybe Elon Musk’s Joe Rogan podcast appearance or Pamela Anderson’s sex tape, but it’d be a flash finish.

The two GOATs engaged in a nearly hour-long conversation for Tyson’s Hotboxin’ podcast, exchanging philosophies in between genuinely expressing how humbling it is to be in the presence of one another. Heart-warming, really.

If you have 47 minutes, watch it below. Obviously.

But if you still have to pretend to do work even after the world’s stopped on its axis, here’s an interesting cliff note (31-minute mark):

During his surprise appearance at the Academy Awards in February, Eminem performed his Lose Yourself, a song that won the Academy Award for Best Original Song nearly twenty years ago. While many of us were enamored just to be watching Picasso paint, Eminem still cannot bear to watch what views as a shameful performance.

“When I went out there everything was cool. I go through the first verse and they had the mic pack that you wear to clip on your belt and your in-ears so you can hear the sound. And I’m rapping and all of a sudden I see between my legs the motherfucking pack’s swinging,” he told Tyson. “That was the one thing we didn’t plan for and of course it went wrong.”

“So I’m rapping the lyrics while I’m doing this, and then I’m like, ‘Man, I’ll just put it in my front pocket. Fuck it,” he continued. “By that time, the song’s over, and I’m, like, ‘Man, what the fuck?’ We rehearsed for that shit—I know the words to ‘Lose Yourself,’ right—but we rehearsed that shit extra, extra, extra just so we didn’t fuck that up. And then that was the one thing we didn’t plan for, and of course it went wrong. I got creeped out, I don’t want to see this shit, I’ll just get angry. I haven’t watched it.”

A lighter moment came at the end of the interview, the 45:55 mark, when Mike Tyson heaped praise on the legendary musician in a way only Tyson knows how.

“Everything you got was, fuckin’—not even given to you. You fuckin’ slaved for it, you know what I mean? You’re the only white guy that knows what it’s like to be a n***a.”

A few more nuggets of wisdom from the mind of Mike Tyson:

–“Any form of murder is a form of self-hate”

–“You have to give your happiness up to accomplish your goals”

Legends. Both of ’em.