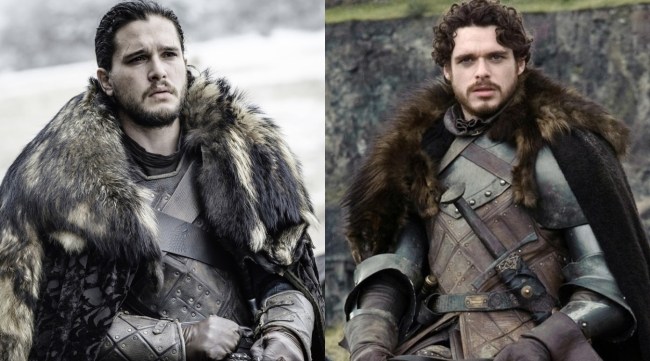 Never one to shy away from a little bit of stunt casting — Benedict Cumberbatch as Doctor Stephen Strange was essentially willed into existence by the fans — Marvel Studios went all-in when it comes to Eternals, as they cast the Stark brothers from Game of Thrones in lead roles.

Set to be released in November, Eternals will feature Richard Madden — known for his portrayal of Robb Stark on Thrones and David Budd on Bodyguard — as Ikaris and Kit Harrington — who famously played Jon Snow — as Dane Whiteman, a.k.a. Black Knight.

Now, with the film currently in production, fans have gotten their first look at the two beloved Thrones actors on the set of the film.

Here’s the official synopsis for Eternals:

“Marvel Studios’ The Eternals features an exciting new team of Super Heroes in the Marvel Cinematic Universe, ancient aliens who have been living on Earth in secret for thousands of years. Following the events of Avengers: Endgame, an unexpected tragedy forces them out of the shadows to reunite against mankind’s most ancient enemy, The Deviants.”

Eternals is set to be released in theaters in the United States on Friday, November 6, 2020.

RELATED: Marvel Studios’ ‘Eternals’ Will Span Over 7000 Years And Will Introduce The Deviants