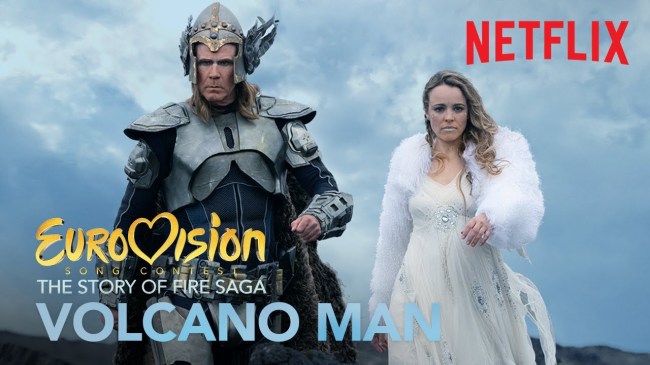 You know what the world needs more of these days? Will Ferrell. Sure, the man may have lost his cinematic fastball about a decade or so ago — in fact, I’d argue his last truly hilarious movie was 2014’s The Lego Movie (which he’s barely in) —  but he still remains one of the funniest and most easily likable actors on the planet.

That said, Ferrell’s latest film — Eurovision Song Contest: The Story of Fire Saga alongside Rachel McAdams –certainly looks like it has the potential to become one of those true Ferrell classics that we all grew to love during the early-and-mid-2000s.

Here’s the official synopsis of Eurovision Song Contest: The Story of Fire Saga, via Netflix:

When aspiring musicians Lars and Sigrit are given the opportunity of a lifetime to represent their country at the world’s biggest song competition, they finally have a chance to prove that any dream worth having is a dream worth fighting for.

Eurovision Song Contest is actually based on a very real competition, as the actual Eurovision Song Contest, which began in the year 1956, is an annual international song competition that sees participating countries submit an original song to be performed on live television and radio. Ireland is currently the leader in the clubhouse, as the country has won the contest a record seven times.