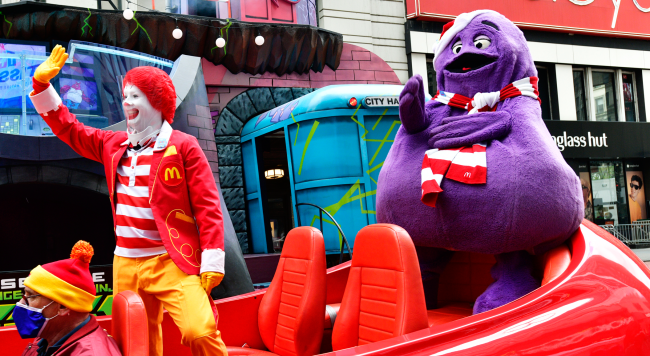 As pretty much everyone knows, McDonald’s has long had a group of characters it has used in promotions over the years. There’s been Ronald McDonald, of course, Hamburglar, Mayor McCheese, Grimace, Officer Big Mac, Captain Crook, Birdie the Early Bird, Uncle O’Grimacey, Sundae, The Professor, the Fry Kids, the Happy Meal Gang, the McNugget Buddies, CosMc, Bernice, Vulture, Griddler, Iam Hungry, and Mike the Microphone.

They all live in McDonaldland and The Hamburger Patch, or they did until McDonald’s was sued by Sid and Marty Krofft for plagiarizing the television series H.R. Pufnstuf.

Most of the McDonald’s fictional characters are pretty self-explanatory. For example, the Hamburglar is a career criminal who steals hamburgers. Mayor McCheese is the Mayor of McDonaldland. He also has a gigantic cheeseburger for a head. (Has Hamburglar ever tried to steal his head? That’s a lot of beef.)

And then there’s Grimace, who is a… ummmm… what the hell is Grimace?

Well, according to award-winning McDonald’s manager Brian Bates of Windsor, Ontario, Canada, Grimace “is an enormous taste bud, but a taste bud nonetheless.”

Apparently, CBC reports, “The purpose of Grimace is to show the food tastes good.”

So… does Grimace just like, rub McDonald’s food all over his body so he can, uh, taste it? Because I have never seen that in any of McDonald’s commercials. Not that I would want to.

Grimace can taste with his whole body

Mr. Bates’ claim has been backed up at least once by the McDonald’s corporation reports Huffington Post.

.@margo_padilla Great question! #Grimace lore says he is the embodiment of a milkshake or a taste bud. What do you think? #AskAnArchivist

Reactions to this explanation for Grimace has many people on the internet very shook up.

My entire world view has been upended. I mean, I never knew what the hell Grimace was, but I didn't think it was THIS. https://t.co/tsqwKsILRe

the creature he escaped from has to be enormous. bigger than anything we have on earth.

THE PURPOSE OF GRIMACE IS TO TRAUMATIZE SMALL CHILDREN

By the way, did you know that when he first showed up he was actually a villain who tried to steal all the drinks from McDonaldland?

False, he originally had 4 arms and was a greedy hamburger style character.

It’s a cover up! pic.twitter.com/kY8HsSsSDD