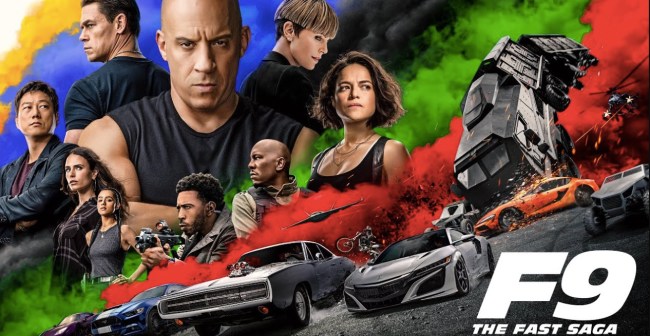 The Fast & Furious franchise is one of those film series that divides opinion to the extent that you’re either in or you’re out. Some movie fans have never seen a single one. Others toss it on whenever it pops up on cable or streaming. Whichever side of that divide you fall on, you find yourself reading this article all the same, because if there’s anything the Fast & Furious franchise does well, it’s command attention, both good and bad.

That’ll surely be the case with F9, as the ninth installment of the 20-year-old franchise proves to be more of what’s propelled the Universal tentpole to its current billion-dollar status: it’s explosive and high-octane, silly in more ways than one, and best of all, it knows it — the greatest strength of Fast & Furious is that it knows what it is and what it’s not, and that remains the case here, perhaps more than ever. That was clear from the moment they meta-cast John Cena to fill the void left by The Rock, something that very much happened to Cena in real life back when he was a WWE superstar.

What that means is: if you like the Fast & Furious movies, then you’ll like this one. If you don’t, then you won’t. Digging any deeper into a movie like this is borderline ignorant as it ignores the fact that the success of these films depends on how you already feel about them. Sort of like The Walking Dead, right? Let’s say you bailed after season five of The Walking Dead or jumped ship after Fast Five: you’re not suddenly going to return for the respective ninth entry, at least in a meaningful way. Franchises are but the manifestation of a filmmaking formula and Fast & Furious has theirs. Gorgeous cars and people, mile-a-minute one-liners, Coronas and cliches about family, increasingly insane stunts, tank tops, and Vin Diesel beating the hell out of bad guys. If you’ve enjoyed those things for the first eight films, then there’s no reason to suggest you won’t when it comes to the ninth.

To put any further critical thought would be like writing a thesis on viral video: just shut up, watch Charlie bite his brother’s damn figure, and enjoy it. Especially in a movie theater with other like-minded people, which is where this movie should, and CAN, be seen.

BroBible’s F9 Review: whatever amount of stars you personally gave the last movie.