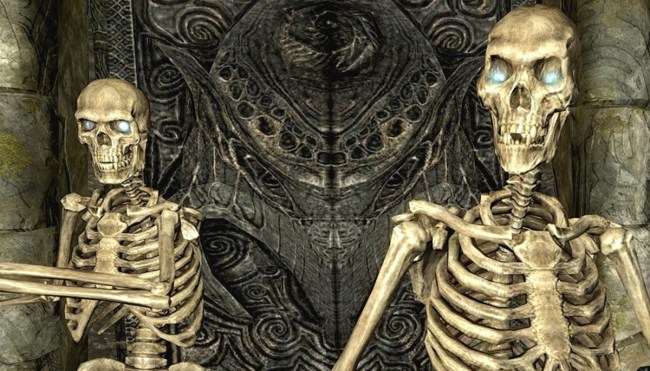 If you’ve played Skyrim (or, more likely, played and replayed a game that has likely taken up hundreds of hours of your life), then I don’t have to tell you the fifth installment in The Elder Scrolls franchise features a menagerie of enemies capable of ruining your day in a wide variety of ways.

In addition to the dragons that make their grand return at the start of the game, you’ll also encounter plenty of unruly bandits, aggressive fauna, homicidal pieces of Dwarven machinery, and giants that would absolutely dominate any intramural slowpitch softball league.

You’ll also encounter a number of undead foes who don’t take kindly to strangers who wander into the many crypts and dungeons they call home. Your biggest worry is typically the overpowered Draugrs tasked with protecting the treasures that can be found at the end of those underground labyrinths, but there are a number of different enemies you’ll usually encounter on your way there.

That includes the skeletons who don’t usually pose much of a threat, but it’s safe to say they were slightly more imposing in a previous life based on the work of a facial reconstruction expert who recently turned his attention to that class of enemy.

Earlier this month, the specialist in question posted their recreation of an “ancient Atmoran from Saarthal, dated to the late Merethic Era,” which is just a really long way of saying “a skeleton from Skyrim.”

The tweet eventually came to the attention of Jonah Lobe, who was tasked with designing the skeletons in the game and who said the reconstruction was a perfect match for the look he’d envisioned while crafting them.

Ha! I literally designed the skeletons from Skyrim – you did an AWESOME JOB with the reconstruction. I wanted them to look thuggish, thick-jawed, thick-browed and sort of Neanderthal-like. This is THAT.