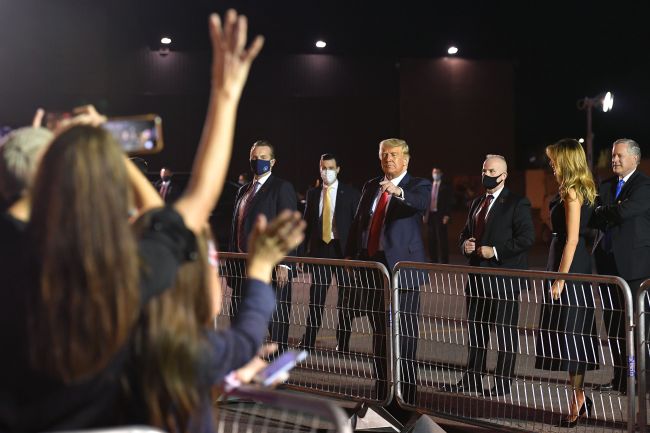 The fake Melania conspiracy theory is back.

On Saturday afternoon a picture of Melania Trump on a helicopter accompanying President Trump to one of his rallies went viral because people are convinced Trump is using a Melania body double to travel around with him.

Here’s the photo of “fake Melania”.

Today's photo of a fake Melania. They think we won't notice this? pic.twitter.com/3xP7MbGy8b

And here’s a side-by-side picture of an old picture of Melania with the one taken today.

I put a pic of Melania in April on the left. The person on the right is definitely not her pic.twitter.com/ZBKs7Hl6Bj

The Internet had hilarious reactions to the fake Melania conspiracy theory.

The only thing I'll miss from this administration is them swapping in new Melanias and just pretending we won't notice like a 4-year-old with a guppy pic.twitter.com/8J0A4E9z5H

I have always been skeptic of the “Fake Melania” theory. That said. This ain’t Melania. https://t.co/EUtqKVVDtZ

Look closely. This is NOT Melania. pic.twitter.com/jGMS3sDDzm

That definitely isn’t Melania and it’s not the first time either. pic.twitter.com/gKAcNMqlo9

You guys our industry isn’t dead. Congrats to Melania’s double for booking that recurring role👏🏻👏🏻👏🏻 pic.twitter.com/OIbmSpAmQg

I was planning on getting a good night's sleep but now I'm freaked out by fake Melania OMG.