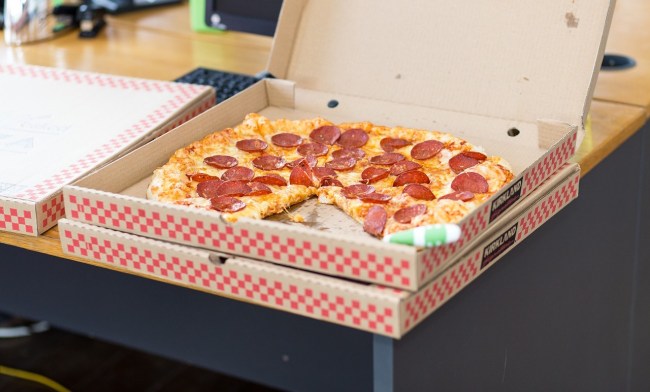 There’s nothing employers love more than telling their workers to go “above and beyond” their job description, but when you’re slaving away in the food service industry for minimum wage, the only shit you should give is the one you dump in the toilet while you’re on the clock.

It’s the little things in life that keep you going.

However, there are certain situations in life where putting in a little effort can go a long way, which is exactly what happened in what is almost assuredly the Feel Good Story of the Week.

According to CBS Indy, a terminally-ill cancer patient named Rich Morgan had planned to travel to Battle Creek, Michigan with his wife Julie so they could get their hands on some pizza from a place called Steve’s, which they had fallen in love with before moving to Indianapolis a couple of decades prior.

Unfortunately, the duo suffered a setback when Rich ended up in the hospital after falling ill and was placed into hospice, which prevented them from making the trip up north.

However, Julie’s father attempted to do what he could by calling up Steve’s and asking them if they might be able to send a card down to Indy to lift Rich’s spirits.

18-year-old Dalton Shaffer (who may have misheard card as “car”) was wrapping up his shift when he took the call and decided to pull the bro move of all bro moves by grabbing a pizza, hopping in his car, and making the 225-mile trek to the hospital.

Shaffer said the trip was more than worth it:

“The family came up, gave me a hug and everything like that, and it was cool.

The expression on their faces and everything was really cool.”

Congratulation to Shaffer for being the second-coolest guy named Dalton behind Patrick Swayze’s character in Road House.