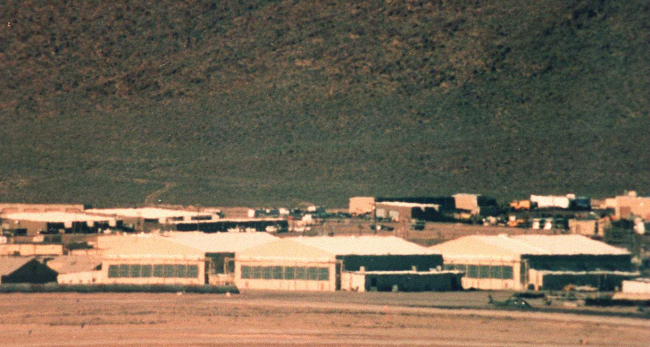 FBI agents recently raided the home of Joerg Arnu, the owner of a popular website that claims to reveal secret about Area 51, George Knapp, Chief Investigative Reporter for KLAS-TV has reported.

Arnu is the longtime owner and operator of the wesbite DreamlandResort.com.

The website claims to reveal secrets about Area 51, the mysterious United States Air Force facility within the Nevada Test and Training Range located near the small town of Rachel, Nevada.

“FBI agents came down hard on the operator of a popular website devoted to all things Area 51–its programs, lore, and legacy,” Knapp reported on Thursday. “More than a dozen agents served a no-knock warrant on the Rachel, NV home of Joerg Arnu, owner of http://dreamlandresort.com.

“They seized all computers, files, phones, photos. At the same time, another team of a dozen or more agents stormed into Arnu’s Las Vegas home, seized all digital devices and files, held his girlfriend at gunpoint,” Knapp continued.

“The warrants were served one week ago. Arnu noted on his site that he does not know the reason for the raid or whether specific images of the secret base posted online may have initiated such a vigorous action by federal law enforcement. We are gathering more info.”

So far, other than George Knapp, no one else associated with any mainstream website has reported this news.

Arnu’s website, DreamlandResort.com, states, “For 20 years and counting Dreamland Resort has been the most comprehensive source for information on Area 51, Black Projects, the Nellis Ranges, TTR, and the ET Highway. The webmaster is a 25-year Area 51 Research veteran and a resident of Rachel, NV, right outside the gates of Area 51.”

On November 5, Joerg Arnu wrote on his website’s message board, “It has been brought to my attention that there is concern about some of the material on this site. I do not believe that collecting or publishing that material is against the law. However, out of an abundance of caution I have removed some material until this is sorted out. I have no further comment on this right now and I cannot answer questions in this matter. Thank you all for your understanding.”

He later followed that note up with another post.

“Ok, I have regained control over my assets and the DLR web site,” Arnuwrote. “So here goes, in case anyone is curious: Last Thursday very early in the morning my homes in Rachel and in Vegas were searched by a combined team of FBI and AF OSI. I will spare you the details but it got quite tense and humiliating for me in Rachel and for my girlfriend in Vegas.

“All my laptops, phones, memory sticks, cameras, drone and other items were seized. When it was all over I was left in Rachel with two broken doors, broken furniture inside the house and zero means to communicate. Our Vegas home fared a little better, with only a broken front door and torn down blinds.

“Each location saw at least 15-20 agents rummaging through our homes and about 8 vehicles. Needless to say it was a spectacle for curious neighbors, both in Rachel and in Vegas.

“In the process I lost ALL my data, medical files, financial and tax records, passwords, everything. On top of that I am stuck with thousands in cost for repairs and replacement of the most essential electronics and expected legal fees. I will speak with an attorney tomorrow about how to proceed.

“To the best of my knowledge I have not broken the law. The search warrants are not very specific but aerial photos of Area 51 and other installations came up repeatedly. So I have taken those down for now to defuse the situation.”

On Thursday, Arnu wrote, ” Over 27k hits today. If the raid was about suppressing information and this web site, it failed. However, I believe this is all about sending a message to the Area 51 community. Question is, how far will they go?”

It is interesting to note that this alleged raid by the FBI took place shortly after NASA established new team of scientists that will participate in a independent study on unidentified aerial phenomena (UAP), as the government calls them and in the wake of the Pentagon creating the All-domain Anomaly Resolution Office (AARO).

Are all of these things somehow related? The truth is out there.