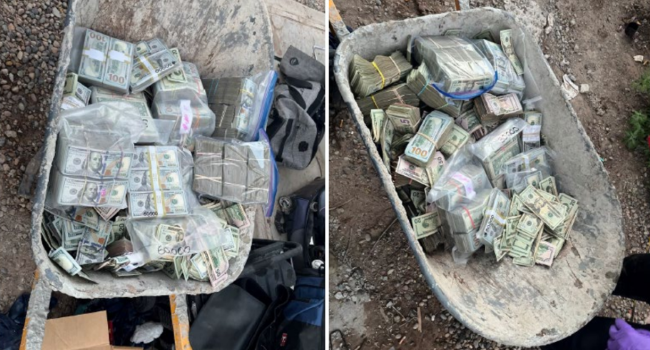 The Albuquerque FBI Violent Gang Task Force recently arrested an alleged drug dealer of the Sinaloa cartel, seizing over one million fentanyl pills disguised as oxycodone and $1.8 million in cash. The drugs were allegedly supplied by the Sinaloa drug cartel.

During the bust, 16 federal search warrants were executed in locations around Albuquerque, New Mexico and at the Bernalillo County Metropolitan Detention Center.

The FBI reports that more than a dozen federal, state, and local law enforcement agencies, including SWAT teams from the Albuquerque, Denver, and El Paso FBI field offices, participated in what “could be the largest ever fentanyl takedown in New Mexico.”

“We don’t do anything in isolation here in New Mexico,” Special Agent in Charge Raul Bujanda of the Albuquerque FBI Division said. “We work everything in cooperation with our partners, and this was no different than any of those operations. The whole purpose of this operation, like everything we do, is to keep our communities safe.

After executing all 16 search warrants, authorities ended up seizing more than one million fentanyl pills, 142 pounds of methamphetamine, $1.8 million in cash, 37 firearms, six vehicles, including two that were stolen, nine ballistic vests, a ballistic baseball cap, and two hand grenades.

Five of 15 total target suspects were arrested during the bust. According to KRQE News, those 15 suspects have been arrested a combined 239 times.

One of the men who was arrested, Jesse “Lobo” Young, reportedly admitted to owning the drugs that were seized. Young was also wanted for violating probation related to three 2017 convictions.

According to federal court records obtained by the Rio Rancho Observer, Young, an alleged member of the Sureños gang, also took responsibility for owning the 24 firearms, including machine guns, that were seized from his residence. Improvised explosive devices, grenades and body armor were also discovered at Young’s home.

A prosecutor’s motion stated, “Young has a reputation as a killer and drug dealer.”

“The quantities of methamphetamine and fentanyl found in defendant’s possession underscore that he played a major role in pumping drugs into our community,” read the motion to keep Young in federal custody. “Further, defendant did not act alone but was part of a larger conspiracy and supply chain that provided a steady stream of fentanyl and methamphetamine in New Mexico.”

The U.S. Attorney’s office stated that two confidential sources “correctly tied Young to a double homicide in 2012 where it was alleged that Young killed two people, one because he was a ‘snitch,’ and burned the bodies inside of a vehicle.”

The murder charges against Young and a co-defendant were dismissed in 2015 on legal technicalities related to the trial and investigation.