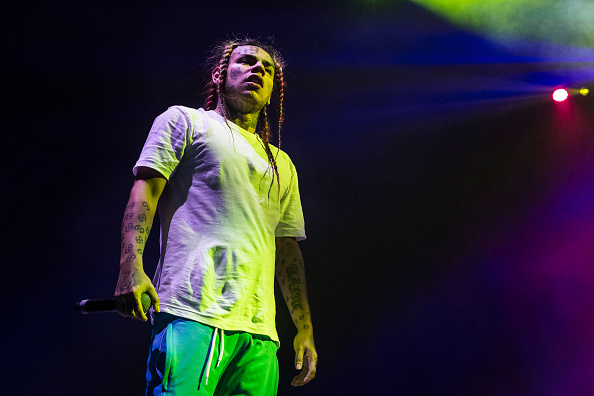 Tekashi 6ix9ine may have done himself in by trying to gain clout on social media.

Back in April. Tekashi’s former manager Kifano “Shotti” Jordan aka Tr3yway involved in a shooting/ armed robbery that was captured on surveillance camera.

Law enforcement sources tell us 6ix9ine’s manager, Tr3yway, is a person of interest in two separate gun-related incidents over the weekend — one that occurred during the Broner fight, and another that went down just hours earlier on the streets of Brooklyn.

We’re told police believe Tr3yway might be the person who fired a shot inside the Barclays Center after a fight broke out with Casanova’s crew, based on surveillance video. They also think he might’ve been the guy who fired two shots 4 hours beforehand, when he was allegedly captured on video shooting at a car following Tekashi’s SUV.

According to TMZ, federal prosecutors in the case claim Tekashi had videos on his phone of April’s armed robbery that he gave to associates to post on social media.

Federal prosecutors filed documents, obtained by TMZ, which include more than a dozen images of Tekashi, his ex-manager Kifano “Shotti” Jordan (aka Tr3way) and other crew members pulling armed robberies and shootings. The evidence seems to have him dead to rights.

According to the docs, cops grabbed videos from phones belonging to 6ix9ine or crew members and matched them with surveillance videos of an April 3 armed robbery in Brooklyn. They say the images prove Shotti pulled the robbery, and cops believe Tekashi watched from the street and recorded video.

There’s a screen grab from that video, which prosecutors think Tekashi gave to a 3rd party to post on the Internet. Also included … matching shots of a backpack that was stolen, and later found in Tekashi’s home during a Sept. raid. That raid also turned up an AR-15 rifle.

Things aren’t looking good for Tekashi who is facing multiple RICO chargers and is currently being held in jail without bail.

Should we file this under "Street Cred gone Bad" or "Policeman scopes out Tekashi 69's Facebook and twitter feed?" https://t.co/ifw5XEaIub