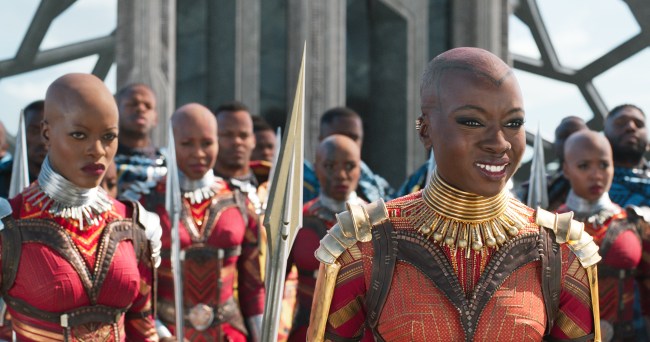 Black Panther has made over $1.3 billion at the worldwide box office, so it will rightfully get numerous sequels as well as spinoff films. One of the ideas for a spinoff would be a movie centered around the women of Wakanda. Black Panther director Ryan Coogler is here for it.

Coogler gave a two-hour talk at the Cannes Film Festival on Thursday where he expressed interest in making a female-focused film as a Black Panther spinoff. “Oh man. That would be amazing if the opportunity came up,” Coogler replied when pitched the idea of an all-female film. “They did it in the comic-book version.”

While the lead in Black Panther is T’Challa played by Chadwick Boseman, Coogler believes that the female stars from the movie have what it takes to have their own movie. “There’s a whole section of the film where T’Challa is out of the movie and you’re just following the women,” Coogler added. “That’s one of my favorite parts of the movie when I watched it, and I didn’t expect that.” The Black Panther director added that any of the actresses “could easily carry their own movie.”

The powerful ladies of Black Panther include Lupita Nyong’o (Nakia), Danai Gurira (Okoye), and Letitia Wright (Shuri) who were members of Wakanda’s elite female fighting force. Marvel Studios President Kevin Feige agrees with the possibilities of these strong women in upcoming MCU movies. “It is an embarrassment of riches,” Feige said of the female actresses in Black Panther. “Even watching the audience at the Black Panther premiere respond to Lupita, Letitia, and certainly Danai in their action sequences… you watch Danai spinning around in that casino, taking out dozens of people, and you go, ‘Of course you can make a whole movie about that!’”

Feige aacknowelged that a Black Panther is coming and Marvel has “ideas and a pretty solid direction on where we want to head with the second one.” But we will have to wait awhile for Black Panther 2 and any other spinoffs.