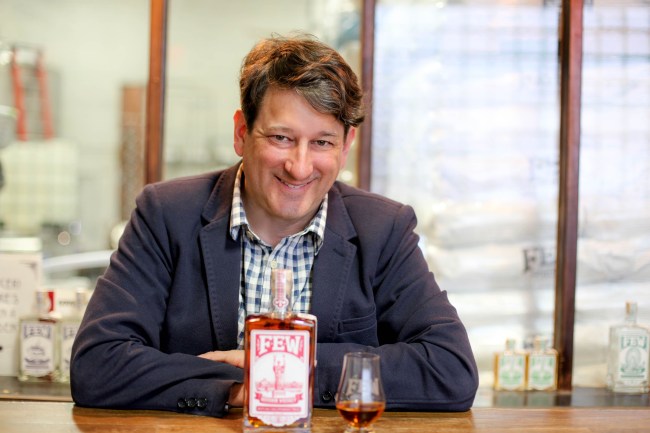 History will show that the United States finally came to its senses on December 5, 1933 with the passage of the 21st Amendment, which officially brought an end to Prohibition after the powers that be realized there wasn’t much they could do to stop Americans from getting their drink on.

Prohibition may have officially begun in 1920 but the temperance movement can trace its origins back to long before then. In the 19th century, people began to blame alcohol for a variety of social ills and turned to various strategies in order to raise awareness for the cause—which included storming into taverns with hatchets in hand and destroying barrels filled with booze.

However, not everyone went to such extremes. This included Frances Willard, who became president of the Women’s Christian Temperance Union in 1879, an organization that encouraged its members to turn to some less extreme measures to bring attention to their crusade.

Willard resided in Evanston, Illinois, a suburb on the outskirts of Chicago that many people consider to be one of the main breeding grounds for Prohibition. It’s also the home of FEW Spirits, an operation founded by Paul Hletko, who I recently chatted with to see how what once was one of the driest towns in the United States became the home of one of its top craft distilleries.

Evanston was ahead of the curve as far as temperance was concerned, as it had already banned the sale and consumption of alcohol in the 1850s:

“The city itself was founded as a dry town. The only reason Evanston existed at all was to outlaw alcohol. The founding fathers of the city wanted to protect the students at Northwestern from its ‘evils.’

They wanted it to be a world-class university and the best way to do that was to make sure their students weren’t drunken louts.”

Plenty of places in the United States remained dry despite the repeal of the 18th Amendment and Evanston was one of them—the sale of alcohol was banned in the town for close to 40 years after the end of Prohibition. However, it’s come a long way since then thanks in no small part to Hletko’s efforts.

The distillery’s founder took an interesting path to get where he is today, saying, “I had a scattered background. I was a guitar player, I was at a record label, and I built guitar effects pedals for a while. I was also a lawyer and professor.”

FEW has made a name for itself thanks to its flagship whiskeys but that wasn’t Hletko’s original passion:

“I’d been a homebrewer for probably 20 years. Distilling without a license is a felony so I never did anything in the backyard or in the basement.”

However, he’d always had a special place in his heart for whiskey and decided to pursue a new venture by putting the knowledge he’d learned from brewing to good use:

After years of experimentation, FEW sold its first bottle in 2011 and has become a force to be reckoned with on the whiskey scene and beyond ever since.

Its core lineup—which has been a staple on my liquor shelf since I discovered the brand a couple of years ago—features a spicy bourbon that makes for a great Old Fashioned in addition to a slightly sweet and fruity award-winning rye that serves as the perfect base for a Manhattan (Hletko himself is partial to Boulevardiers).

FEW also produces a breakfast gin made with Earl Grey tea, lemon, and the requisite juniper that—if you can’t tell by the name—is perfect for getting your brunch on. Hletko says it’s “a great way to ease into your day” and recommends using it to whip up a French 75, which he describes as “an elegant mimosa” (it also makes a killer Aviation).

FEW can be found in liquor stores around the country and beyond but Hleko has made it a point to never stray away from the reasons he started a craft distillery in the first place:

“To me, craft is the intention of why it exists. It’s small, it’s handcrafted, and made toward a vision that’s not economic in nature. There are cheaper ways that we could produce whiskey but we produce [how we do] because that’s how we like it. I don’t care about the money. I care about the liquid.”

Luckily for him, the liquid speaks for itself.