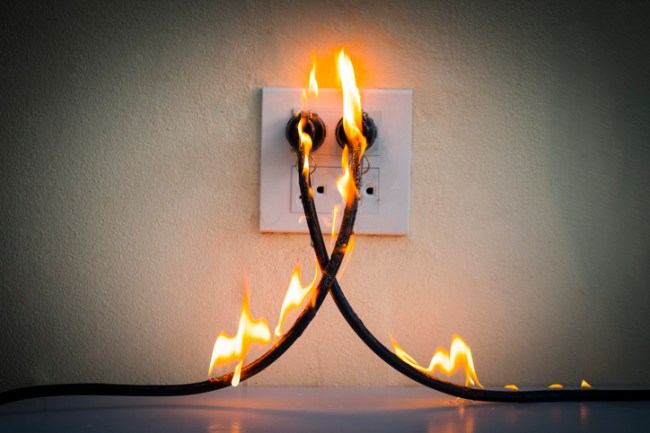 Imagine you’re a fireman in Southern California or Australia. The past few months have been a living hell for you. Every day, you strap on your gear and fight a Sisyphean battle against roaring fires that spread across drought-cracked hills. And just when you think it can’t get any worse, you respond to a call from a local high school because the science lab is on fire. Was it an experiment gone wrong? A faulty Bunsen burner? Nope. Some snot-nosed kid put a penny in the socket behind his iPhone charger and the entire building exploded. But at least he got 1400 views on TikTok.

CBS News– A new challenge on the popular social media app TikTok is sparking concern from both parents and fire officials. In a letter alerting fire departments and educators, Massachusetts Fire Marshal Peter J. Ostroskey said the “outlet challenge” is “an unsafe use of electricity and fire.”

He explained that the viral video challenge, which “encourages unsafe behavior,” involves teens recording themselves sliding a penny behind a phone charger that is partially plugged into an electrical outlet. The goal is to cause sparks, electrical system damage, and in some cases, fires.

It’s stuff like this that makes me think we should lower the age at which we try minors for adult crimes. If you’re 15 and you do this shit for views and likes on the Tok (do I have that right?), our penal system should treat you like the career criminal you long to be. Look at you, you bad boy. Something tells me you’ll make a great bootleg tattoo artist.

Whatever happened to old-fashioned values? One of the first things I learned as a kid was not to fuck with power outlets. Still, I do remember kids who loved fire—a few hooligans I knew at 13 who loved lighting shit on fire in parking lots. We didn’t have much to do in Maine, and they liked to spray Axe on their jeans and hop around with their pants in flame for a few seconds. Or they’d put a bunch of lighter fluid in a trash can and see if they could hail passing airplanes. Who knows, it wasn’t the worst Saturday night. But they didn’t do it for the approval of others on some app; they did it for love of the game. They were pyros, and now they’re probably on FBI watch lists but the point remains: it’s all about intention.