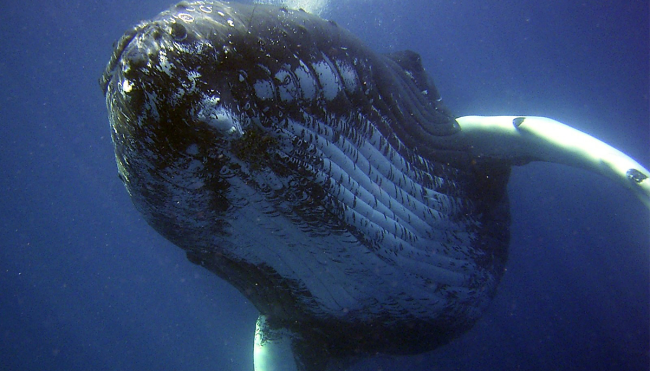 In 2015, the world was treated to one of the most enjoyable viral videos in history courtesy of the two human embodiments of the state of Massachusetts who encountered what they believed was a “baby fahckin’ whale” while fishing in Boston Harbor.

After the video started to make the rounds, people with some knowledge of marine biology quickly determined the “whale” in question was actually a sunfish. However, last week, it appeared another resident of the state had encountered an actual whale he claimed swallowed him while he was diving for lobster off of Cape Cod.

The clip of Michael Packard recounting the wild incident that unfolded in the waters of Provincetown immediately took the internet by storm, and he was kind enough to shed more light on what went down in a Reddit AMA where he also addressed the insane revelation that he survived a plane crash in Costa Rica 20 years ago.

The story has all the makings of a movie that Packard said he’d like to see Matt Damon play him in, but in recent days, some people have started to cast doubt on its veracity thanks to a number of aspects that seem a bit…hard to stomach.

On Monday, NBC Boston published an article after speaking with Dr. Peter Corkeron, who runs the Marine Mammal Conservation Program at the New England Aquarium. He told the outlet, “Being accidentally swallowed by a feeding whale…that just never happens,” and while he admits a humpback whale could theoretically scoop up a human in its massive mouth while feeding, his comments make it hard to believe Packard spent 30 seconds inside the mouth of the animal before getting spit back out.

The New York Post also contacted a doctor at the hospital where the lobsterman was treated who questioned if a whale was actually responsible for the minor injuries he was treated for prior to being discharged. They said that anyone who “ascended from a 45-foot depth in 20 to 40 seconds” would almost certainly show signs of damage stemming from such a sudden change in pressure (known as “barotrauma”), so the fact that Packard managed to swim away with both his eardrums intact is another red flag.

I normally approach stories like this with the same mindset as Fox Mulder, and while I want to believe, the evidence is making it hard to not take the Dana Scully approach.