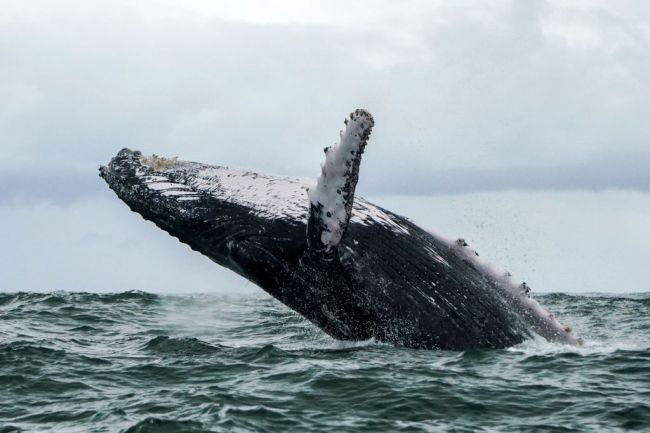 Remember the scene in Finding Nemo when Dory and Marlin are swallowed by a whale? Well, Michael Packard lived out the Pixar film in real life on Friday.

The 56-year-old has gone lobster diving off of the coast in Cape Cod countless times. It is literally his profession. However, he experienced the unimaginable on Friday morning— something he had never been through before.

Packard was swallowed by a whale.

Fortunately, he was spit out and suffered only minor injuries. After being treated for soft tissue damage, Packard was released from the hospital on Friday afternoon. He, with help from his son, decided to host a Reddit ‘Ask Me Anything’ on Saturday. The user, @bloxiefox, was verified through a photo of Packard.

The thread, titled ‘I’m a lobster diver who recently survived being inside of a whale. AMA!‘ is fascinating. His son Jacob read the questions to his father, Packard replied, and Jacob answered on the site.

Here are some of the most interesting inquiries and responses:

@bloxiefox: “I was in a dry suit, couldn’t really tell. Also, the mouth was filled with water.”

@thewayfaringflashpac: “Are you disappointed you didn’t get shot out his blowhole like in the cartoons?”

@bloxiefox: “That probably would have hurt a lot more. (speaking as Jacob, this would have been epic.”

@Flying-Wild: “What was your ‘last thought’ when you realized you’ve been eaten by a whale?”

@bloxiefox: “My wife and kids.”

@bright_shiny_objects: “What actor do you want to play you in the future Netflix movie?”

@TheAnnieDude: “1. How did you get out? 2. Were you able to see anything? 3. What bad things could have happened inside which didn’t happen fortunately?”

@bloxiefox: “1. Eventually the whale managed to dislodge me by moving its head and tongue, I think. 2. Nope, completely dark. 3. I could’ve suffocated or drowned if I didn’t retrieve my regulator in time.”

@wrinklestiltskin: “So you lost your regulator when it attempted to swallow you?”

@bloxiefox: “I lost hold of it for a moment. (Also, speaking as Jacob, it’s a common misconception that he was swallowed or attempted to. He is adamant that the whale would not have been able to actually swallow him.”

@Sakrie: “Marine biologist here, can confirm whale literally couldn’t if it wanted to. Filter-feeding whales like the humpback have an esophagus thats 4-8 inches. Very possible it could have choked to death on him though.”

@scottimusprimus: “What do you think caused the soft tissue damage, and why do you think your legs were hurt?”

@bloxiefox: “Blunt force of the whale’s mouth, I could feel it clamping down on my legs. Also I got pretty banged up while it was trying to force me out.”

@RocketSurgeon22: “Did the whale have a gag reflex? Was it making a noise while trying to spit you out?”

@bloxiefox: “It didn’t SPIT me out, rather I think it forced me out by movement and using its tongue.”

@epigenie_986: “I’m super curious about the sounds he heard!”

@conmanmurphy: “Did you see the whale coming and just couldn’t get out of the way or did it sneak up on you?”

@bloxiefox: “Not at all. Came up behind from me, felt it close down, then boom.”

@part-time-dog: “What is the feeling of being ingested most comparable to? Is it like being crushed by a couch or being pummeled on all sides? Were you thinking “oh great I’m the guy who gets eaten today” or is it too tough to process what’s happening until it’s over?”

@bloxiefox: “It was full of water, and I could feel the muscles of its mouth convulsing around me, it was a really strange feeling to be sure. Can’t draw a meaningful comparison.”

@amypalgreen87: “Did you try to communicate with the whale?”

@bloxiefox: “I don’t think it would have been in the mood to converse with me at the time.”

This entire saga is insane. Although the whale may not have been able to scientifically swallow him whole, Packard easily could have died. To make things even crazier, this is only one of the craziest things that has happened to him in his life.

Ten years ago, while Packard was traveling in Costa Rica, he was in a small plane that crashed in the jungle. The crash killed the pilot, co-pilot and a passenger. The remaining five passengers spent two nights in the jungle with series injuries. Rescuers found them right in the nick of time, with death imminent.

@NeonSandwich: “I was reading in the other thread about a plane crash you were involved in. Would you be willing to delve into that experience and how it impacted you, your life, and worldview? Thanks for doing this!”

Jacob answered on his father’s behalf.

@bloxiefox: “(I don’t usually like to ask my dad about the plane crash very often. What he’s told me when I ask him is that he was just astounded to be alive, if he was rescued even a day later he wouldn’t be here today. He has a large scar on his back. This all happened before I was born, but I’m sure it shaped him into the brave and passionate man he is today.)”

Reddit user @sharkifyification asked about the most interesting thing that Packard saw while diving.

@sharkifyification: “Damn! Did you have to go through the process of reporting it to authorities or anything like that?”

@bloxiefox: “Yep. It was a missing person, an active case. Stumbled upon it and got it found.”

Packard has lived a crazy life, but he says that being swallowed by a whale is the most insane thing that has happened to him. Makes sense.

For Packard (and Jacob) to answer questions is really cool. It was undoubtedly a scarring moment in his life and he didn’t have to open up, but he did. And we are the better for it!