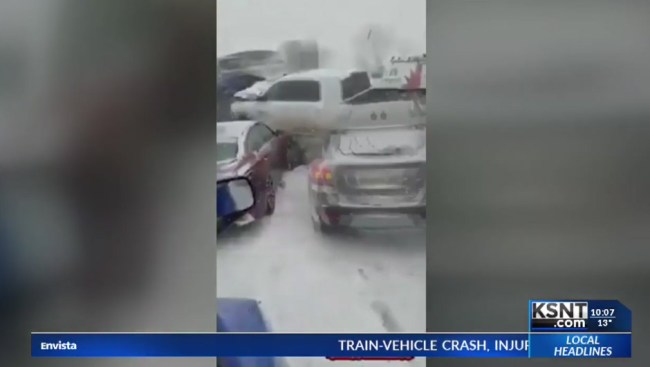 Whiteout conditions combined with icy roads caused several massive chain-reaction crashes over the weekend, with the worst one (at least worst one caught on video, taking place on I-70 in Missouri.

KSDK-NBC reported there had been 729 crashes – and that was just in Missouri, and from just from Friday morning to Saturday morning.

A multi-car crash in Denver involved around 49 vehicles as a result of what CBS4 Meteorologist Chris Spears called an “isolated but intense squall.”

While in Missouri, on westbound I-70, a reported 47 vehicles were run off the road or damaged when, that started, according to a Missouri Highway Patrol report, when a 2012 Peterbilt tractor-trailer lost control in the snow, partially blocking the road, followed by other drivers coming down a slight hill too quickly to have any chance to stop.

A truck driver, Jamon Weaver, who captured some truly harrowing video footage of the pileup, told KSNT-TV, “I felt like I was in Final Destination.”

“I’ve never been in an event or a circumstance like this in my life,” he said.

After an eighteen wheeler crashed he said he hopped out of the truck to make sure everyone was okay, and what he saw was jarring.

He showed us where the truck was hit and there were even some remains of the car that crashed into him.

It reportedly took seven hours for the highway to be cleared and reopened.