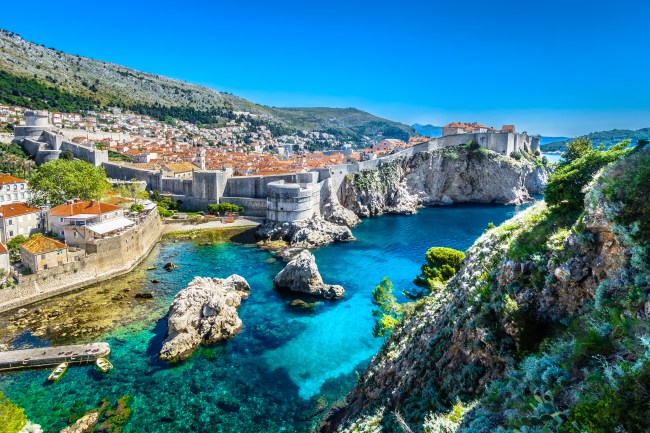 Anytime the slightest thing goes wrong at a music festival these days it will immediately be compared to the Fyre Festival which set the gold standard for complete buffoonery and disaster.

Ultra in Miami made ‘Fyre Festival’ headlines earlier this year after festivalgoers had to walk home due to a transportation meltdown. Now, the Fresh Island Festival at Zrće beach in Croatia is receiving those comparisons after a forest fire broke out last night and the fire was blazing so hard it looked like the night’s sky was on fire.

According to reports, hundreds (thousands?) of music festival-goers who were there to see artists like Tyga, Afrobeats, Tory Lanez, Stefflon Don, and others were evacuated after the forest fire began raging to the Hip-Hop beats but not before plenty of people had time to take footage of the mayhem and share it on Twitter.

This looks more like a warzone than a main stage but to be honest, that would be a pretty cool festival aesthetic if they were able to pull it off without endangering the lives of thousands:

Fresh Island is lit. I mean on fire pic.twitter.com/g4GXsfQXfF

According to a report from the BBC, fans attending the Fresh Island Festival were bussed by police escort to the town of Novalja (nearest town) which meant that many of them were unable to make it back to their hotels.

“Thankfully police are escorting buses through to collect any remaining festival-goers,” the organisers said.
Rappers Stefflon Don and Yxng Bane were among the acts due to perform, with Tyga headlining.
It is unclear whether the rest of the festival will be cancelled. In a statement, organisers said they were “doing everything we can to go ahead as planned to continue the parties”. (via)

A 3-day music festival that started on a Monday???!?!? What am I missing here? There aren’t any public holidays in Croatia right now. I know that most Europeans get a minimum of 1-month’s vacation each year (usually a lot more) but why in the hell would you ever throw a Hip-Hop festival on a beach and start it on a Monday?

This just doesn’t make any sense at all.

Looking at the latest tweets from the festival’s official channels, it appears as if everything is a go for today:

GREAT NEWS! 💙🙏🏼🏝
The emergency services have now cleared the fire, reopened the road and deemed the route and Zrce Beach to be safe. Shuttle buses are also running as scheduled from Novalja.

We are therefore pleased to confirm that Fresh Island will continue as planned with no further disruptions, starting with Tim Westwood’s pool party at 4pm in Papaya.

Thanks again for everyone’s patience and we look forward to seeing you on the beach again very soon!

By the way, this is what the festival grounds look like when it’s not on fire:

I guess everyone can now look forward to turning up on a Tuesday….

Seriously though! Let’s say you rage this festival for three days, Monday through Wednesday, recover on Thursday, and then you’re supposed to do it all over again on the weekend? What’s in the Croatian water that’s enabling the party stamina like this or are they all somehow sober for these festivals (I know they’re not)??

Glad to hear that everyone made it out safely and the fire was finally contained in the wee hours of the morning.