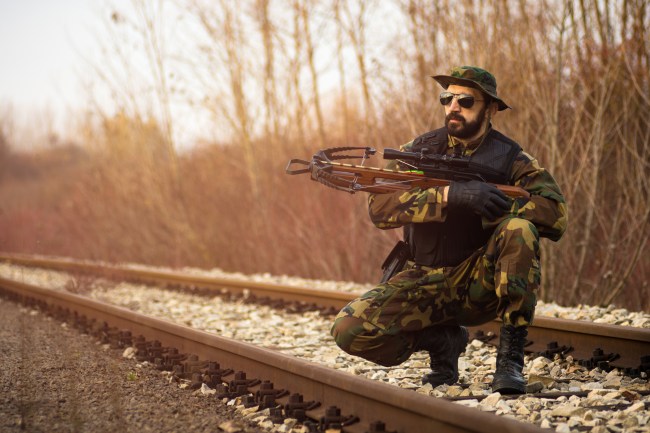 Unbelievable story. The first piece of news I’ve read in months that made me feel alive. I understand this is a bummer for German police but let’s be honest, we’re not going to feel bad for the German police today, tomorrow, or for another 6,000 years. Let’s dive in baby!

First, who is he? Yves Etienne Rausch. Think Jason Bourne meets Legolas. Ladies, he’s only 5’6” but given his skill set, I wouldn’t swipe left if I were you. Or me. Perhaps a tad eccentric, Rausch is known by locals to be “polite, friendly, and pleasant.” He’s also impervious to hot weather, which could mean he’s tuned his body to ignore physical pain.

NY Times– Known as an eccentric character by locals, who say he often wore a heavy black coat even on the hottest days, Mr. Rausch did not have a reputation as being dangerous.

Our story opens on a small red shed. The interior is simple, bare, neat, consisting of a wooden table with a metal chair, a small camping mattress rolled neatly in the corner, a water purifier that recycles urine into clean water. Oh, and a bow and a quiver of arrows hanging from a nail on the wall, always within reach.

The officers approach, following up on a tip that a squatter is living inside. They knock. “Come in,” says a calm, disinterested voice. They enter, taking a moment to let their eyes adjust to the gloom. A shadowy figure sits at the table, wearing a black overcoat even though its July, perfectly at his leisure as though he’d been waiting for them.

“Jah, hallo. Are you squatting?” one asks, in a thick German accent, sounding like a total doofus.

He doesn’t respond. Instead, he picks his teeth with a splinter from the table.

“Give us the bow, danke,” says a second officer, his voice betraying his nerves. Rausch smiles, reaching slowly for the bow on the wall. He knows every centimeter of the weapon, every groove, like an extension of his own arm. He places it on the table and the officer picks it up.

“I am going to pat you down, bitte” says a third. There are now four officers in the shed and it’s crowded. It’s a small, red shed—the sort of thing you’d see in a children’s book about anthropomorphic chickens. The officer approaches. A flash of steel, too quick for the eye to see. In an instant, Rausch is holding a gun to his jugular. He speaks, his tone as steely as the glock in his hand:

“Lay your guns on the table. Slowly.”

The leader officer gulps, urging the others to comply with a hurried hand wave. They slowly unstrap their weapons and place them on the table. Rausch never takes his eyes off them. He keeps the gun on the officer’s neck, gathering his belongings and the other guns into some cool camping pack that he bought using a father’s day promo code. The officers remain rooted to the spot. They’re new to the force and terrified.

He shoulders his bag, winks at them, and disappears into the night. Immediately they radio it in, watching as the hobbit-like figure lopes into the trees.

“The forest is his living room. That’s why — given the impassible and at times steep terrain — it is difficult for us to find him quickly,” said the [police commissioner].

The forest is his living room. The trees are his friends. He knows which berries to eat, which to crush into poison for his arrow tips. He doesn’t need a fire, preferring the darkness. He is in his element.

I’ll keep you updated on our Rambo’s whereabouts. But if I know Yves Rausch as well as I think I do, we’re not going to hear from him unless he wants us to hear from him. And that could be a while…