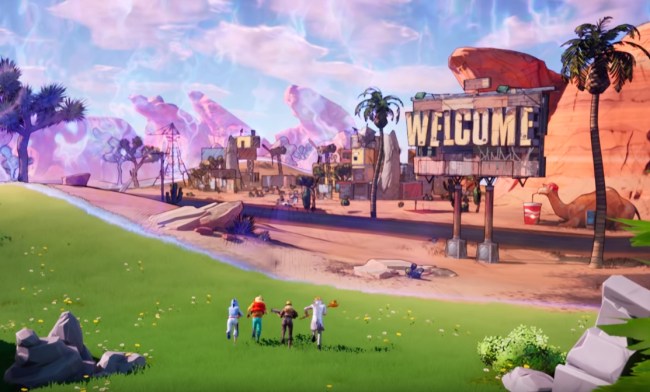 Epic Games loves collaborations with other popular pop culture entities and in the latest update for Fortnite, there is an intriguing crossover with another massively successful shooter video game — Borderlands 3.

Borderlands‘ Psycho and Claptrap are invading Fortnite’s island and they are bringing some cool weapons with them such as gun wraps and sprays. A new rift zone area has popped up in Fortnite near Paradise Palms that looks like Pandora, the strange planet where the Borderlands franchise takes place. There is even the distinct art style of Borderlands.

Epic Games wants to monetize this crossover so you can buy things like a Psycho skin and Claptrap backpack. If you are able to survive in the new area for four seconds without taking damage then you receive a Shield Bubble that is invulnerable to projectiles and explosives that lasts for 30 seconds and can withstand up to 400 HP, but players can still run through the protective dome.

Fortnite has had ambitious crossovers in the past with Avengers: Endgame and John Wick: Chapter 3, but this is the first crossover with a major video game.

The crossover event will last until September 10, three days before the Borderlands 3 release date, so 2K Games and Gearbox are using the crossover to help promote their new game.