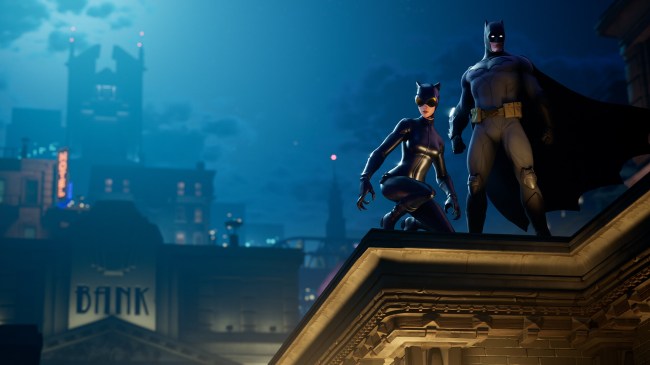 The Fortnite X Batman crossover just went live in celebration of Batman’s 80th anniversary and there are exciting Gotham City Challenges. As the Caped Crusader, you’ll get new wonderful toys such as a Batman Grapnel Gun and Explosive Batarang. Plus, there are superhero skins available with the Catwoman and a Batman Caped Crusader Pack at the Fortnite Store.

In the Fortnite X Batman collaboration, you’ll need to find Batman’s Bat Signals and Joker gas canisters. We’ll guide you on how to find them.

You’ll need to defuse at least three canisters for the Gotham City challenges. Press the button to defuse the gas canisters. This is what Joker Gas Canisters look like.

The Joker Gas Canisters that had been leaked a day or two ago is NOT a usable item.

Locations:
– Every POI according to the Files. pic.twitter.com/P8k32GbnIG

There is a Joker gas canister that can be found near an overturned car in Salty Springs, north of the Gotham City point of interest.

There is a Joker gas canister at the center building located in Pressure Plant.

There is another Joker gas canister in Pleasant Park next to the bench.

There is a gas canister inside Shifty Shafts next to a big wooden box, another in Fatal Fields near the barn, a canister next to a grey car in Loot Lake, another in Retail Row under the table and chairs in front of the taco shop, one in the middle of Moisty Palms, one inside the fountain at the Lazy Lagoon, and a Joker gas canister at Haunted Hills.

Another challenge is to illuminate at least three Bat Signals. You can find Bat Signals in Moisty Palms near the big tree, on the mountain that’s northeast of Snobby Shores, close to a house on the mountain in Pleasant Park, another on a roof in Junk Junction, a Bat Signal on the northwest side of the prison on the rooftop.

Other Gotham City Challenges include:

"Welcome to Gotham City" Challenges with EVERY Reward!

Completing each challenge earns you 10 battle stars, for 50 in total. Players will be able to unlock a Catwing Glider (6 challenges), Batman Banner (4 challenges), and Batarang Spray.