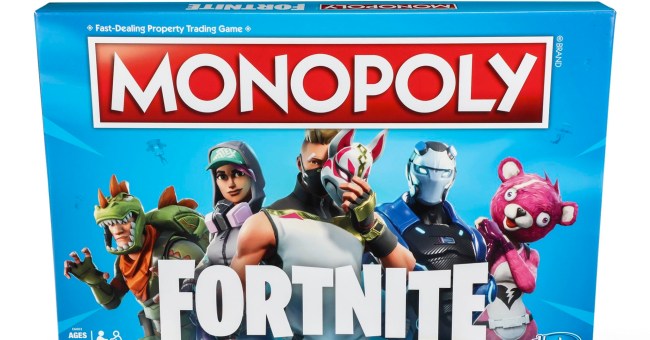 Board games were a staple of my childhood. During my summers in the Adirondack Mountains in upstate New York my family would gather around the table at night to play Monopoly, Candyland, or some other game like that. It was a shared childhood experience amongst all my friends, they did the same with their families.

Hasbro is trying to bring that shared family experience back with a Fortnite version of Monopoly that’s all but certain to make a quadrillion dollars from parents buying the game in an effort to try and reconnect with their kids who DGAF about playing board games or spending time with the family.

I’m assuming that 99% of the people reading this already know what Fortnite is but for the 1% that doesn’t, it’s an online game with over 125 million players that’s basically like The Hunger Games turned into a video game. 100 players face off against each other and the goal is to be the last man standing.

Thrilled to show you the final art and game board for Fortnite Monopoly! It’s so so fun and such a unique spin on the classic game mashed up with last player standing Fortnite. In stores Oct 1st!!! pic.twitter.com/aNqJmvfpb2

The game will be released in just a few weeks on October 1st, just in time for people to add to their Holiday Shopping Lists.

READ NEXT: Want To Play ‘Fortnite’ Like An eSports Legend? Here Is The Gear That Tyler ‘Ninja’ Blevins Uses

Here’s what CNBC has to say about how this Fortnite version of Monopoly will be played:

Much like in the video game version of “Fortnite,” where 100 players fight to the death in “Battle Royale” mode, the goal of “Fortnite Monopoly” is also to be the “last man standing,” Epic’s Mustard notes in his tweet. But Hasbro has also introduced some changes to traditional “Monopoly” gameplay for the new version, including replacing money with health points and giving players the option of “shooting” their opponents to damage their health.

And instead of classic property names like Park Place and Marvin Gardens (taken from real streets and neighborhoods in Atlantic City, New Jersey), “Fortnite Monopoly” will feature tradable properties named after locations from the “Battle Royale” map in “Fortnite.” For instance, “Fortnite Monopoly” will replace Boardwalk with a property called “Tilted Towers,” named after an area in the video game where players often do battle with each other. (via)

Interested? I’ll be sure to feature the Fortnite version of Monopoly in my weekly ‘Things We Want‘ gear guide once the board game is released.

READ NEXT: This Botched ‘Fortnite’ Rescue Attempt Involving A Golf Cart And A Cliff Has A True ‘Wait For It’ Moment

For more on the Fortnite version of Monopoly that’ll be released by Hasbro in the next few weeks you can click here to read the article in full on CNBC.