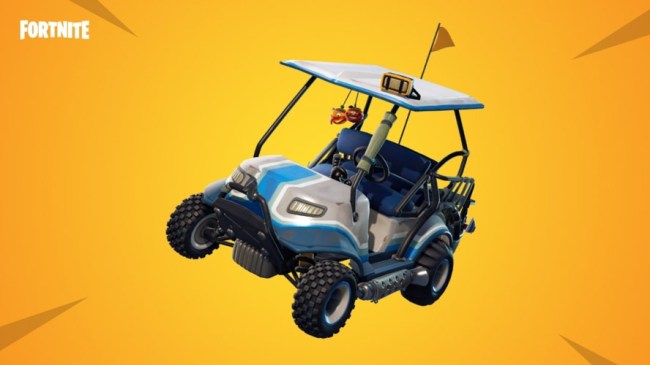 Without a doubt one of the best things to come out of the insane popularity of Fortnite are the many, many meme, glitch fail, and other creative videos that end up on the internet.

Earlier this year the addition of the mobile shopping cart to the game created some true video highlights as comical memes sprouted up all over the web. Before that it was Port-A-Fort grenades being used to wreck opponents in the game.

And now, with golf carts being added to the mix, a whole new set of opportunities for calamity exist, feeding the never-ending loop of comedic Fortnite videos.

One such occasion happened recently and was shared to Fortnite’s Twitter account. It involved a very high cliff and a golf cart. You can probably see where this is heading, but you need to watch the video for full enjoyment.

What happened was, Fortnite streamer Mr.Muselk noticed after dropping one of his opponents that another player was trapped about 200 meters down the side of a sheer cliff. So he decided to be a hero and try to rescue the player by building ramps and stairways down to the beach to help out.

Unfortunately, once Muselk got to within about 20 feet of the stranded player the game wouldn’t let him build anymore. That’s when inspiration struck in the form of a golf cart he had seen sitting near the edge of the cliff.

Thinking that perhaps he could drive the golf cart down to the bottom, the stranded player could then bounce of its roof to the ramp he had built.

Watch as @MrMuselk attempts to rescue a fellow player.

I like to think he was trying to stop me from flying over the edge. In the end. He saved me.