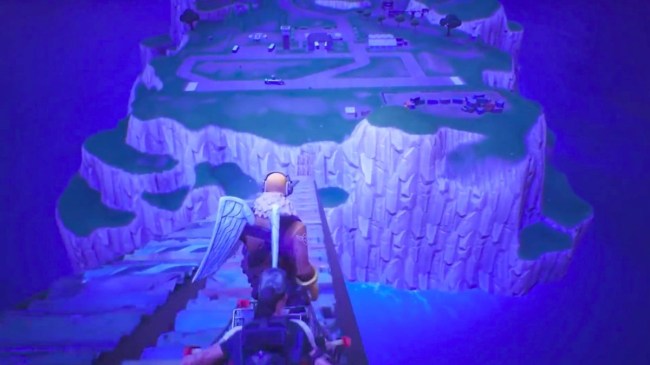 Shopping carts were introduced to Fortnite a week ago. And while many were disappointed that the first vehicle in Fortnite was an actual shopping cart, the rickety carts have produced some A+ memes and now it has enabled one ingenious gamer to travel to the mystical Spawn Island.

When you first enter a Battle Royale game, you’ll punch other players or practice your dance moves in the lobby known as Spawn Island. You get flown over to the main island by an airbus to do battle. There are no documented cases of any Fortnite gamer traveling from the main island back to Spawn Island… until now.

YouTuber OrangeGuy achieved the previously unachievable by launching himself back to elusive Spawn Island. Thanks to a glitch and a ton of resources to construct a massive ramp, they were able to pass through the invisible barrier separating the two islands. The player sped down a track and then launched off a ramp. They floated through the air and touched down on Spawn Island. Mission accomplished.

So what is a greater Fortnite: launching your cart to Spawn Island or filling the entire Dusty Divot?