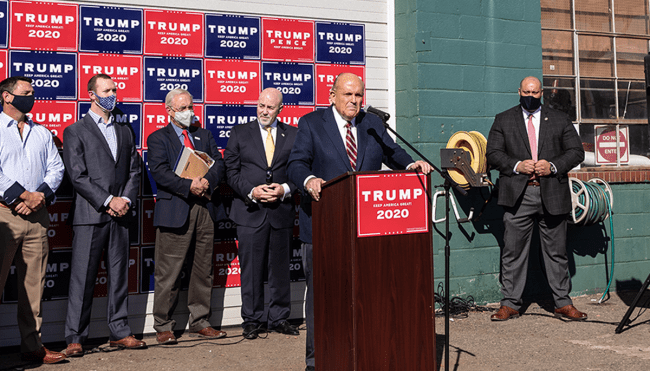 As you may or may not know, America has spent the past few years grappling with an ever-widening political divide that shows no signs of shrinking in the immediate future. As a result, there’s an increasingly few number of issues that people on both sides of the aisle are able to see eye-to-eye on.

However, anyone with a functioning sense of humor has to acknowledge the objective hilarity of what unfolded in Philadelphia on November 7, 2020, the fateful day when Rudy Giuliani attempted to hold a press conference at the Four Seasons hotel but ended up delivering his comments while standing in front of a garage on the property of a landscaping company with the same name.

It didn’t take long for Four Seasons Total Landscaping to capitalize on the truly incredible mix-up by whipping up branded merchandise to sell to the masses, and while the moment may have passed, that hasn’t stopped the company from continuing to milk it for everything it’s worth.

According to The Philadelphia Inquirer, the attendees who managed to snag a ticket before they sold out in less than 20 minutes will have a very special beer to help them stay refreshed over the course of the show, as Four Seasons Total Landscaping has teamed up with Philly’s Funk Brewing Co. to create “Lawn Jawn IPA,” a limited-edition brew with a label paying tribute to the legendary snafu.

Funk is only producing 30 cases of the beer, and while the bulk of the run will be exclusively reserved for concertgoers, you’ll also be able to try your luck at Pennypack Beer Distributors, which is slated to receive six cases on August 17th.

This is truly the gift that keeps on giving.