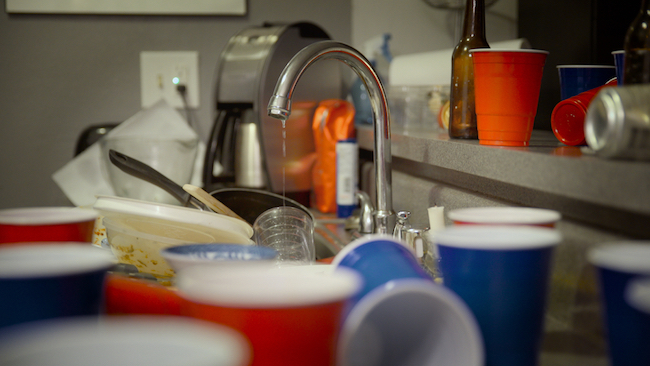 As someone who gets mildly annoyed when I can’t find a spot at a bar that’s flanked by two empty seats, it’s hard for me to imagine that I used to devote the majority of my weekend nights to pushing my way through the doors of party houses like a Japanese subway passenger and navigate the crowded hallways in the hopes there were still be clean Solo cups by the keg so I wouldn’t have to track down a bottle of underproofed vodka to “sanitize” an empty one lying on the floor.

However, for the majority of college, parties are really the only way for people who are looking to get sloppy drunk to scratch that itch. As a result, most people are willing to overlook all of the terrible downsides that come with throwing down in an overcrowded house for the one upside: a virtually unlimited amount of alcohol.

One of the unfortunate side effects of cramming as many people as possible into an enclosed space is the unique cocktail of odors created by the smell of sweat, vomit, spilled beer, CVS cologne, and cigs inside. I’ve come across some pretty gnarly things lingering in the air in my day, but I don’t think anything will ever compare to the truly unparalleled atmosphere at a frat party at American University in November.

According to WJLA, police were dispatched to a house off campus after receiving a number of noise complaints. Their arrival prompted eight people to lock themselves in a bathroom and one partygoer to jump out of a window on the second floor, which might have had something to do with the fact that the cops discovered a shit ton of alcohol and literally no one over the age of 21.

They went to administer breathalyzer tests to attendees but hit a bit of a snag when they discovered the air in the house had a BAC of .01 (1/8 of the legal limit). The six members of Sigma Alpha Epsilon who lived there were charged with 126 counts of possessing and furnishing alcohol to minors, so while they might have had a ton of their future hopes and dreams dashed, at least they have a great story they can tell in bars for the rest of their potentially-ruined lives.