A Behind-The-Scenes Look At The New Fred B. Noe Distillery Proves It’s Poised To Push The Limits Of American Whiskey 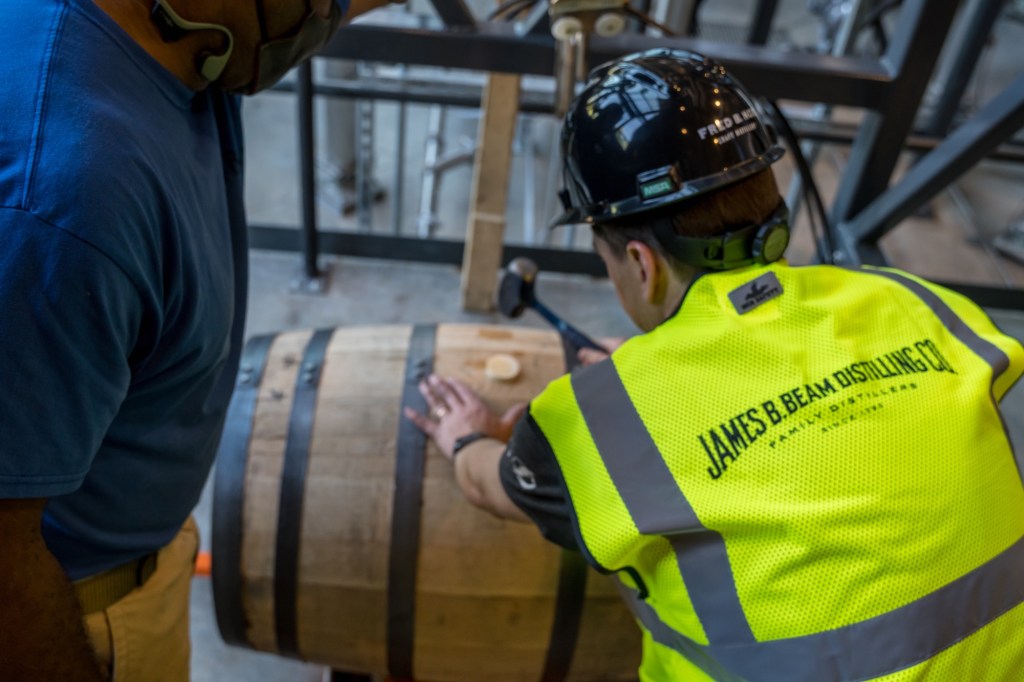 The First Family of Bourbon has announced the next chapter of their whiskey legacy which stretches back more than 225 years. The new Fred B. Noe distillery is named in honor of 7th Generation Jim Beam distiller Fred Noe and it will be led by Fred’s son Freddie, an 8th generation Jim Beam Distiller.

I was fortunate enough to be one of the first people to tour the new Fred B. Noe Distillery which was already up and running and producing whiskey while we were there. Freddie led us through the building where we got to sample the ‘distiller’s beer’ and distillate. I was even given the chance to fill my own barrel of Jim Beam bourbon that I signed and sealed so it could head off to the Jim Beam warehouses where it will age for the next 5+ years.

Here’s that barrel-filling process at the new Fred B. Noe Distillery:

Before we get to my tour of the new Fred B. Noe Distillery, let’s dive into the details of what it is, where it’s located, and what they’ll be doing at the new craft distillery.

What is the new Fred B. Noe Distillery? 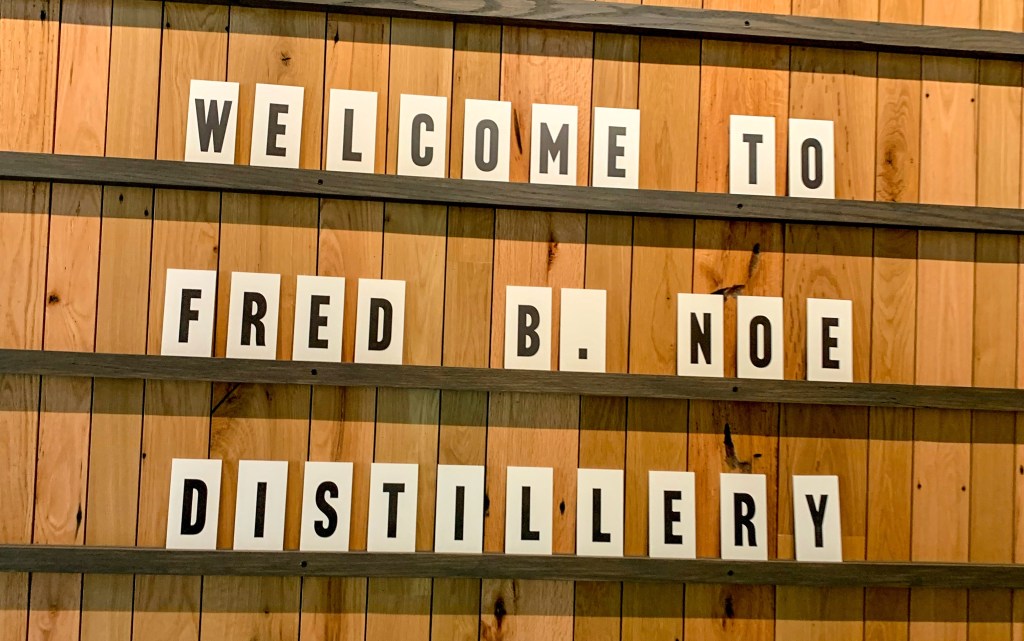 The Fred B. Noe Distillery is a new distillery in Clermont, Kentucky located on the edge of the James B. Beam Distilling Co’s property. The distillery is built to one-sixth the production capacity of the main distillery which will allow them to experiment A LOT MORE.

The James Beam Distilling Co. will also move the production of some of their most popular ultra-premium whiskeys to the new Fred B. Noe Distillery. This lineup of premium that will be distilled at the new distillery includes Booker’s Bourbon, Baker’s Bourbon, and Freddie Noe’s own Little Book.

In the new Fred B. Noe Distillery, Freddie will experiment with every aspect of the fermentation, distillation, and blending process. They are even set up to run a four-grain bourbon with the new silos should the opportunity ever present itself.

A Strong Focus On Education

Education will also play a prominent role in the new distillery. There’s a state-of-the-art classroom where students studying at The James B. Beam Institute for Kentucky Spirits at the University of Kentucky will be able to get hands-on experience. UK’s Beam Institute was devised as a way to teach and train the next generations of the whiskey industry and the new Fred B. Noe Distillery will play an integral role in bridging that gap between the classroom and real-world experience. 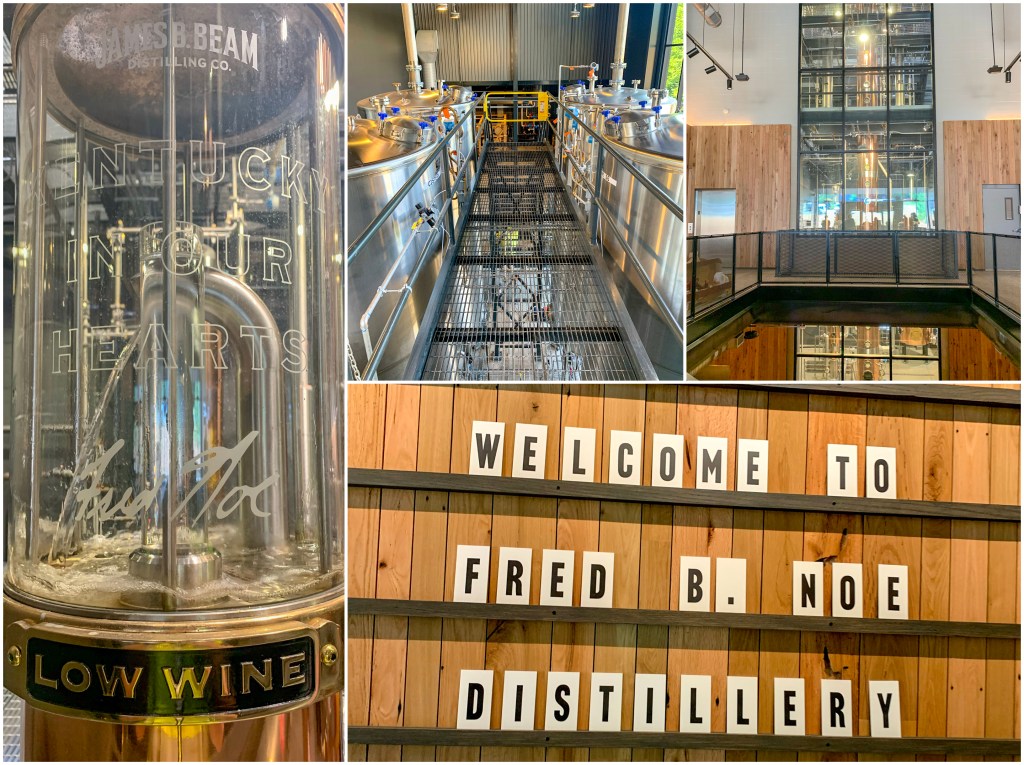 The staff working in the new Fred B. Noe Distillery will quite literally learn every aspect of the whiskey-making process up to the point of being experts. This all started years ago when Freddie Noe was on a trip to Japan with Beam’s counterparts at Suntory. One of the Suntory employees took Freddie through their distillery and was able to explain every tiny detail of their process and how everything comes together.

Freddie Noe told me at that time he assumed the Suntory employee was his factory counterpart, one of the top managers who oversees the entire whiskey-making process. Freddie was wrong, it was just a regular employee but Suntory’s structure was to make every one of their distillery employees an expert in every step of the process. After that trip, they wanted to mirror that level of expertise back in Clermont, Kentucky.

There will be 3 to 4 people per shift running the full facility at any given time with 13 employees in the new craft distillery working in rotating shifts. That number includes operators, blenders, and distillers all rotating around the clock and learning every aspect of the whiskey-making process.

The Past, Present, and Future

When Freddie’s grandma passed away the then CEO of Beam-Suntory asked Fred what he could do to help Freddie pave his way in the family company. Fred’s answer was simple, Freddie needed a facility of his own. This was an enormous request and one that would eventually come with a $60 million-plus investment in the campus.

The name of the new facility is the ‘Fred B. Noe Distillery’ which is named in honor of Freddie’s father Fred who is a 7th Generation Jim Beam Master Distiller. At the time we toured the facility, Fred hadn’t seen his name on the building. One can only imagine was an emotional moment once it was finally revealed. 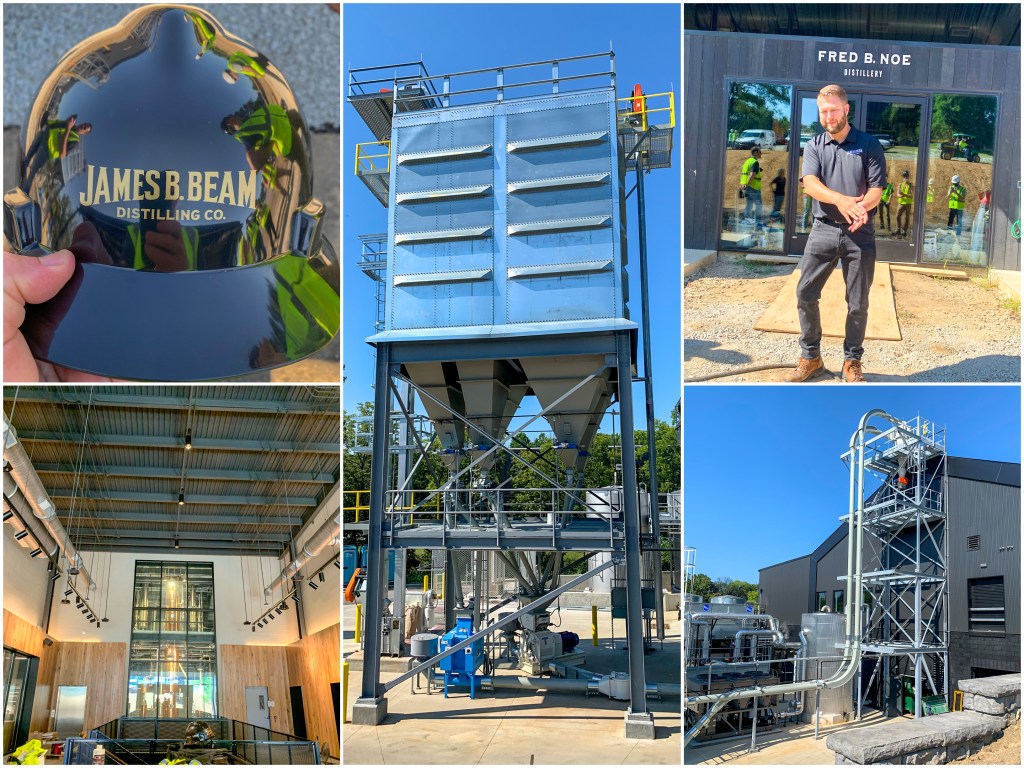 The Jim Beam property in Clermont, Kentucky sits on over 420 acres. The Beam Distilling campus in Clermont is a massive operation where they make and store not just Jim Beam, but nine total brands of whiskey including Legent, Basil Hayden, Baker’s, Booker’s, and Knob Creek. And then there are plenty of different age statements and recipes across those brands.

So why open a new craft distillery on the same property to make the same bourbon? Well, the short answer is the need to innovate.

Before the Fred B. Noe Distillery, in order to really experiment and innovate with new whiskey recipes, it meant experimenting on a massive scale. But with a craft distillery 1/6th the size of the James B. Beam Distilling Co, they can really mix things up.

There are four silos in the new distillery, 3 are full size and one is split in half (so 3 + .5 + .5) which opens up the possibility of a four-grain bourbon at some point. Designing the Fred B. Noe Distillery from scratch gave them a completely blank slate to work with and consider what works best at this scale and what are some inefficiencies they could fix that might’ve been going on for generations.

An example of this is the James B. Beam Distilling Co. (JBBDCo) yeast and how it’s made and stored. The yeast used in Jim Beam has survived since prohibition. Let that sink in for a moment. Jim Beam himself used to take it home every night. Going forward, all of the yeast made for the full facility will be made at the new Fred B. Noe Distillery.

Freddie Noe told me they are “maybe the only distillery that propagates their own yeast on-site” and this will give them an unprecedented ability to closely monitor the yeast for quality and uniformity.

One of my first thoughts when I heard they were moving production of Booker’s Bourbon, Baker’s, Little Book, and other projects to the Fred B. Noe Distillery is ‘will it taste the same?’ Sure, the recipes will be the same as will the ingredients but it’s an entirely new facility. So what will happen in the near future (near future = possibly up to several years) is a parallel distillation process with these bourbons.

They are already making these ultra-premium whiskies at the Fred B. Noe Distillery while continuing to make them at the other facilities. Once these whiskies are barreled and ‘aged out’ they can then determine the quality in side-by-side tests to ensure everything is perfect as it should be.

The Passing of the Torch

“Our new distillery is really the heart and soul of the Beam legacy. Years ago after my dad, Booker Noe, created the original small batch bourbons, he looked to me to welcome more whiskey drinkers into our family of brands. Now as I look ahead, it’s with great pride that I hand the reins of this special place over to my son Freddie, and I look forward to working side-by-side as he leads the next chapter in whiskey making for the James B. Beam Distilling Co. 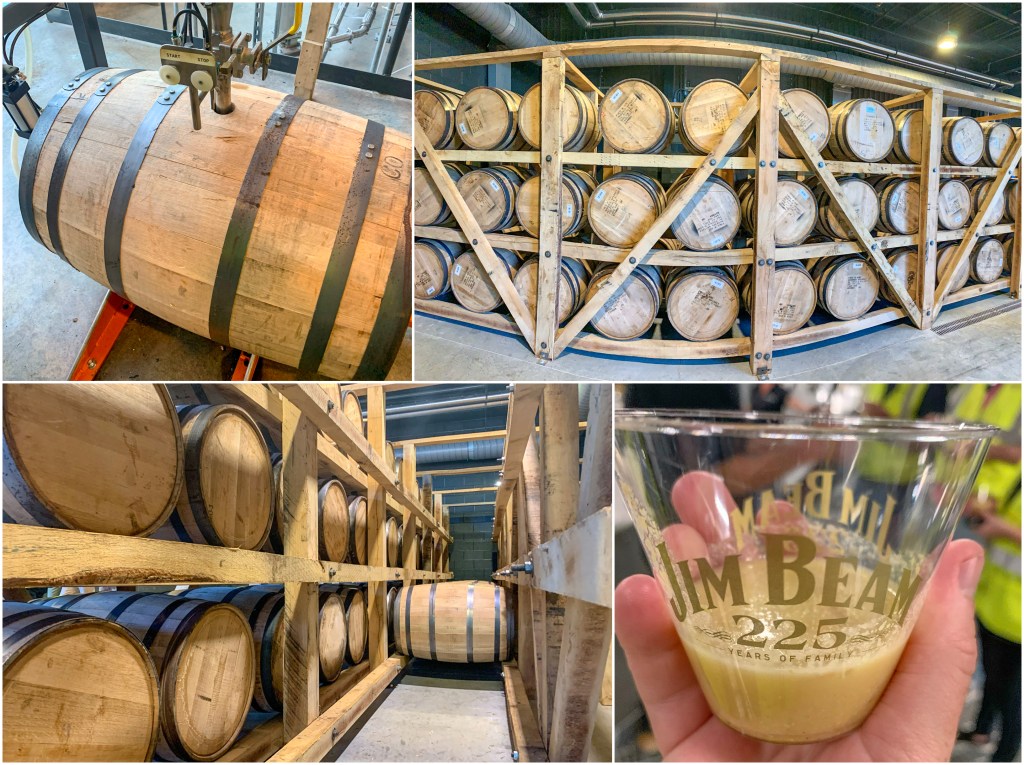 At the new distillery, Freddie will continue to experiment with new fermentation, distillation and blending techniques to produce category-defining and boundary-pushing whiskey of the highest quality. I can’t wait to see what he does with it, and I know that my dad is smiling down on us today.”

This is Freddie’s project and it will afford him the opportunity to really take some swings and push American whiskey innovation. Everything is on the table from 4 grains, different grains, and toasted grains to different age statements, different recipes, and who knows what else.

Freddie alluded to some really interesting things in the pipeline and I was able to taste several unnamed and unlabeled whiskeys that were at various stages of development so I can’t divulge any specifics on those.

But it’s clear from his confidence (and comments) that Freddie Noe is ready for this next chapter of the James B. Beam Distilling Co:

“This new distillery represents my family’s bourbon legacy – both where we’ve been and where we’re headed,” said Freddie Noe. “In this new home, I look forward to honoring all of my dad’s contributions and continuing to innovate and push the boundaries in American whiskey. Over the last five years, I’ve been exploring new and interesting blends, ages and flavors on my quest to build upon the legacy my dad and granddad pioneered. I’m eager to show the world what we’ve been up to, and to offer fans everywhere a taste of the special whiskies we’ve been cooking up.”

What Else Will Happen At The Fred B. Noe Distillery?

I mentioned above there will be a large classroom area as part of their partnership with the University of Kentucky but there will also be a conference room space for Beam Suntory meetings with their Japanese counterpart. There is also a private testing room set up for blending and whiskeys where VIPs may be invited in the future to special tastings and events.

But this is an extremely state-of-the-art facility and one that Freddie Noe will be able to lead virtual tastings from and connect with Jim Beam fans all across the planet. So even if the chances are slim that you might visit the new craft distillery there’s a much better possibility of tuning into a virtual tasting hosted there.

Here’s your boy cheesing with his barrel, by the way. (Me, it’s me). 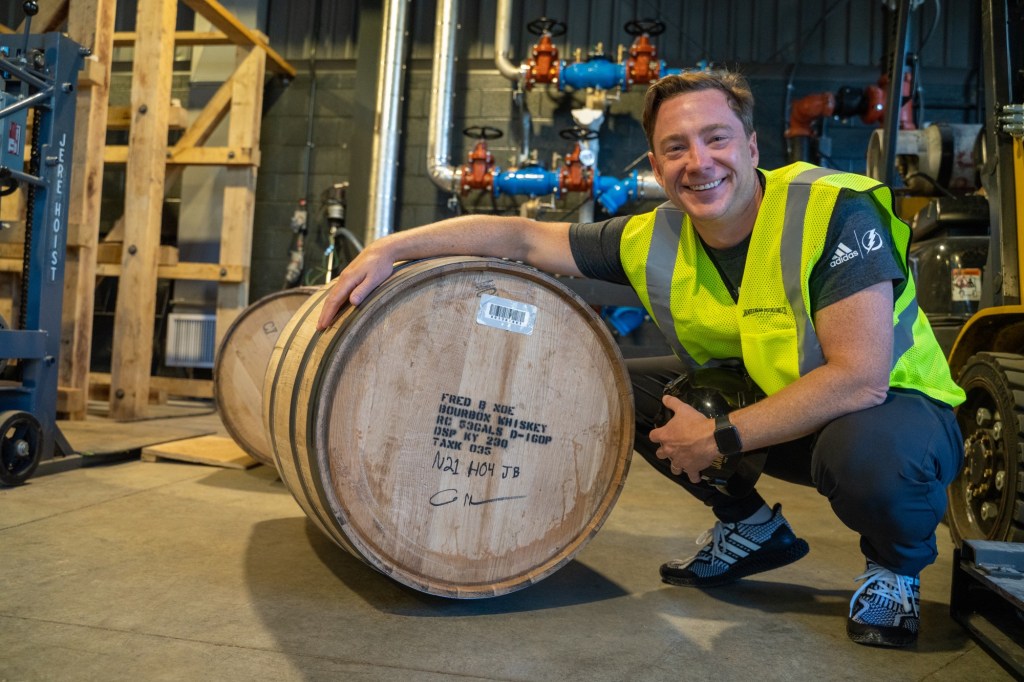 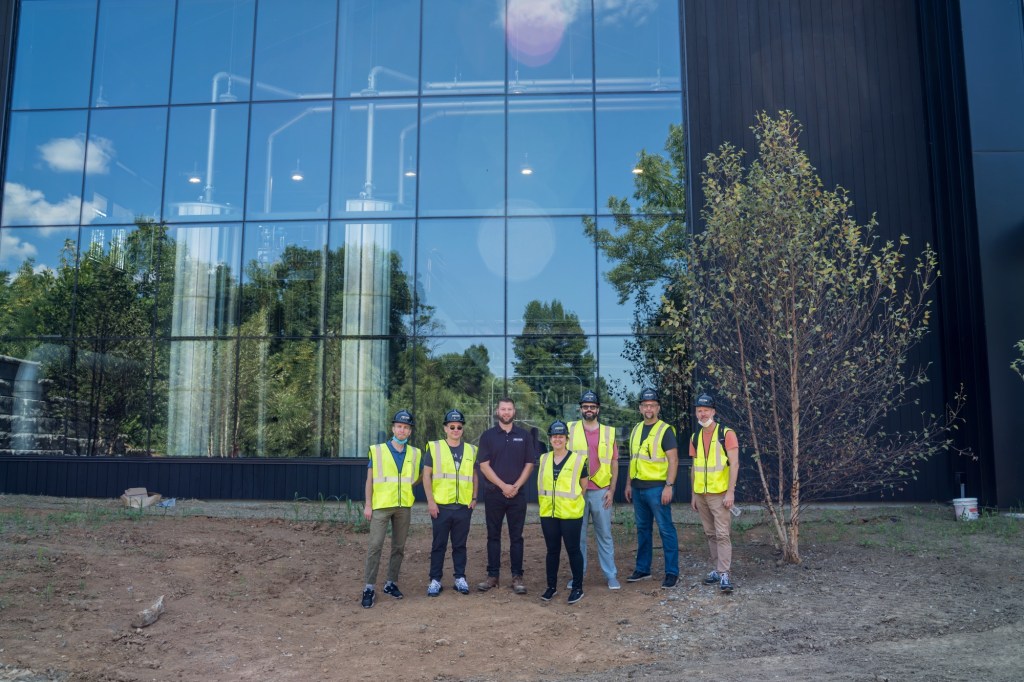 For more information on the new Fred B. Noe Distillery, you can visit the Beam Distilling website.