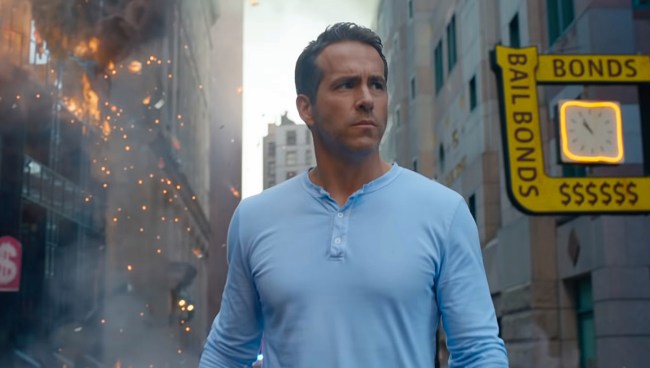 While it’s certainly not the adjective I thought I’d use to describe this film, Free Guy is absolutely adorable: super sweet, well-intentioned, and most of all, fun. Its comedy comes from earnest genuineness, not jaded cynicism, which is the same exact thing we spent the last year praising Ted Lasso for.

While the plot is a little thin, its conceptual execution is incredible, as the video game element of it all is truly innovative. Never have the inner workings of a video game felt more real, and never has a film made that setting feel more lived in. Similar to Wreck-It Ralph but in live-action. In fact, more than anything, Free Guy left me feeling bummed that Cyberpunk 2077 stinks and that Grand Theft Auto VI is taking a decade as it’s the *exact* type of video game I’d love to play.

Honestly, and perhaps most surprisingly, Free Guy is more of a pseudo-coming-of-age film and a throwback action-comedy from the early 2000s than it is a standard 2021 IP blowout extravaganza (although there are a handful of epic cameos that will blow you away towards the end) and that’s something to be celebrated. That’s not to say there’s no action — the action, like the rest of the movie, is inventive — it’s just not where Free Guy‘s heart lies.

With all that said, I’m not sure how many A-listers other than Ryan Reynolds could’ve pulled this off. When he steals Netflix’s Red Notice (alongside The Rock and Gal Gadot) and enters the Marvel Cinematic Universe with Deadpool 3 in the coming years, it’ll be time to have a different conversation about his movie stardom, and the dude feels pretty singular these days. Free Guy is *his* movie and it’s propelled by his now-trademark combination of good-guy charm and slick, smartass delivery.

Reynolds certainly isn’t alone, though — while it’s his charisma that steers the ship, all of the supporting players, such as Jodie Comer, Lil Rey Howery, Taika Waititi, and Joe Keery, pitch in character arcs worth engaging with. Comer, in particular —  still just 28-years-old — more than holds her own as an action hero alongside the scene-stealing Ryan Reynolds.

All told, while Free Guy is an inherently futuristic tale (it’s literally about a piece of artificial intelligence), as a movie, it’s a throwback to an era gone by when all you needed to make a successful blockbuster was an interesting premise, a movie star, and some heart. That’s what Free Guy is and it’s all the better for it.