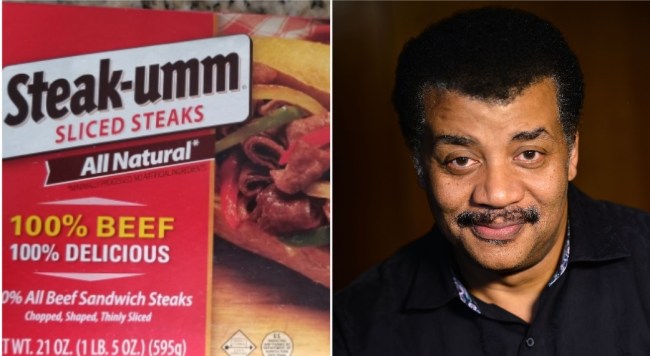 Over the past few years, Steak-umm has made a name for itself by making thoughtful social media posts despite being a corporate brand and on Monday night their social media manager took issue with Tyson’s latest tweet about science.

Steak-umm went on to crush NDT by calling him a clout chaser who posts nonsense all day for likes and retweets.

the irony of neil’s tweet is that by framing science itself as “true” he’s influencing people to be more skeptical of it in a time of unprecedented misinformation. science is an ever refining process to find truth, not a dogma. no matter his intent, this message isn’t helpful https://t.co/sf4zLm33Jm

nope. science itself isn't "true" it's a constantly refining process used to uncover truths based in material reality and that process is still full of misteaks. neil just posts ridiculous sound bites like this for clout and he has no respect for epistemology

Apparently, Steak-umm has been beefing with Neil deGrasse Tyson for years.

a beef 3 years in the making

People on Twitter seemed to enjoy the frozen steak brand going after NDT.

Steak-umm has snatched Neil deGrasse Tyson’s heart out, sliced it, and made a sandwich out of him. pic.twitter.com/nhHdyqKHeX

Steak-umm is taking it to Neil deGrasse Tyson and I am here for this battle of the titans. pic.twitter.com/D1iTYUclFJ

I wanted to come at Neil for that tweet, but I am not as brave as these meat sheets. https://t.co/dxBwp6dO2n