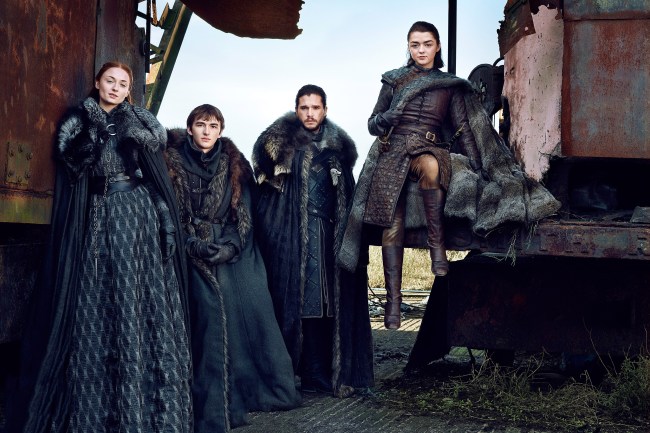 Spoilers ahead. But you knew that already. There aren’t many Starks left in Westeros, they are turning into an endangered species these days. We’re left with Arya, Bran, and Sansa, and some may consider Jon Snow a Stark based on R+L=J theory. Well bad news, apparently at least one more Stark is set to perish in the near future. This tragic news comes to us via “Game of Thrones” director Alan Taylor, who revealed that death is coming for one more Stark. As if the Starks hadn’t lost enough in the past few seasons.

In the last episode titled “Beyond the Wall,” Arya Stark and Sansa Stark have a sibling quarrel at Winterfell over who has suffered more since their father Eddard Stark was beheaded. The power struggle between the Stark sisters got real heated during the debate and you have to wonder if either one would hurt the other to advance their own rise to authority? Taylor who directed “Beyond the Wall,” provided this hint that one of the Stark sisters may very well die in an interview with Variety.

“I think both characters have been through absolute hell since the death of their father in very different ways, and have turned into absolute lethal individuals. We’re very aware of how lethal Arya is, because she’s displayed it over and over again. But I love the fact that the tables do turn back and forth between them; it really is a shifting back and forth of power between them in those scenes we had. And when Sophie says she won the ‘Battle of the Bastards,’ she’s right. I love the fact that these two come back, they’re both lethal, and I just wanted to give the impression, as much as possible, that one of them is going to die. But you’re not sure which one.”

Not surprising that “Game of Thrones” would have one sister kill off her own flesh and blood. So could we see this brutal death in the season 7 finale of “Game of Thrones?” Taylor said, “Arya is certainly lethal and sort of threatening, but when Sansa sends Brienne away, who is Arya’s natural protector, something is coming very soon between them, and it will be violent but surprising.” Sansa sent Brienne of Tarth, who is sworn to protect all of the Stark children and bonded with Arya, to King’s Landing to meet with Cersei Lannister. Littlefinger is definitely wary of Arya and could be attempting to manipulate Sansa into hating her sister or warning her that she will betray her. Shit is going to be crazy next Sunday.