One Year Ago Today, ‘Game of Thrones’ Pooped Its Pants 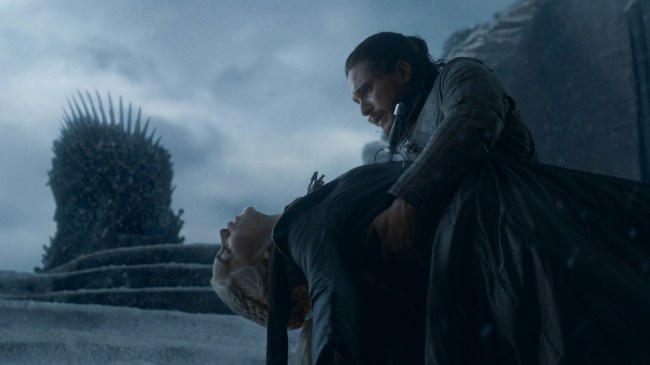 It’s been a whole year. Considering how much has happened since then, though, it may as well feel like an entire lifetime.

One year ago today (May 19), Game of Thrones wrapped up their six-hour final season and eight-season series with the now infamous concluding episode “The Iron Throne”. Put simply, they pooped their pants. I’d usually make an attempt at describing Thrones‘ stunning downfall more intelligently than characterizing it as pinching off a dump in your skivvies, but I’m applying about as much effort as they did into the finale itself — you get what you give.

The series finale was a microcosm of the issues that plagued the final season as a whole, as a majority of the episode’s pillars seemed to be held together with haphazardly applied Krazy Glue. Nothing seemed to make sense, and when it did, its defining quality was that of carelessness. “Oh, you mean to tell me that Dany just “forgot” about the Iron Fleet and couldn’t see them coming from miles away when they shot down Rhaegal in the middle of a sunny afternoon? Oh, okay!” As Eric Cartman once said to his own mother, I at least want to be wined and dined after I’ve been fucked.

A victim of the showrunner’s own greed, Game of Thrones was ultimately undone by the desire of David Benioff and D.B. Weiss to move onto their next project. Prior to Thrones‘ final six episodes, “The Double D’s” were two of the hottest commodities in Hollywood, as they were set to launch their own Star Wars franchise while also signing a deal with Netflix. Oddly enough, we haven’t heard from them since, as they were subsequently booted off of Star Wars and have yet to provide an update on what they plan to bring to Netflix.

Today, as Game of Thrones “celebrates” the one-year anniversary of its finale, I can’t help but think about Benioff and Weiss: how do they feel about what they’ve done? Do they regret their decision to jump the gun or do they feel as though their machinations were justified? Do they look back upon Tyrion’s legitimately comical “Bran the Broken” monologue with bursting pride or utter disdain? How do they feel about the rapid demise of Daenerys now? How about the fact that Jon didn’t need to leave King’s Landing?

One year ago today, GAME OF THRONES aired its comically bad series finale, cementing Season 8 as one of the biggest disasters in television history.

“Who has a better story than Bran the Broken?” 😂😂😂pic.twitter.com/4WLu7TkYVw

I am not Benioff and Weiss — in case that wasn’t already obvious. I do not have the intellect nor the creativity to pull off what they achieved for seven-or-so excellent years. But nonetheless, as a writer, I am technically a “creative”, and personally, the knowledge that I sabotaged and undermined my own legacy out of self-inflicted greed would eat away at me day by day. If Benioff and Weiss have any sort of artistic integrity, then they know — deep down, better than anyone — that the chorus of complaints from scorned Game of Thrones fans rings legitimate, as the drop off in quality can only be attributed to their own doing. It’s because of them, and them alone, that Game of Thrones went from one of the greatest television series of all-time to becoming the widely-mocked textbook on how not to handle an ending. And hopefully, that devastates them as much as it does us fans, because one year later, I’m still not over it, and if you’ve made it this far, I doubt you are either.