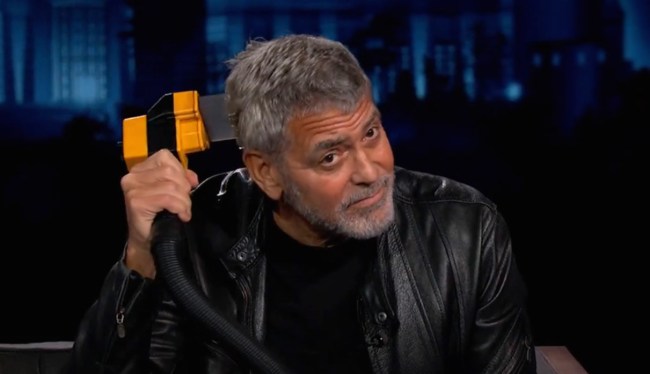 Wednesday night George Clooney stopped by Jimmy Kimmel Live, which is inexplicably lit like a dive bar these days, to shoot the breeze (i.e. promote the fact that he has a movie titled The Midnight Sky coming out) and talk a little turkey.

That’s not a figure of speech, he really did talk about turkey and the other food he made for Thanksgiving.

“Just cover everything in butter,” Clooney advised. “Everybody’s like, ‘This tastes great!'”

He also talked about the fact that his twins have learned how to speak Italian, which neither him nor his wife Amal speak, setting themselves up for a lifetime of terror when they won’t be able to understand what the twins are saying to one another.

Oh, and he also demonstrated how to cut your hair with a Flowbee, something which he recently admitted he has been doing for years.

Actor/director George Clooney tells @thattracysmith that he's been cutting his own hair for years – by using the Flowbee haircutting machine https://t.co/SWYT8pFC8h pic.twitter.com/bKepm5LQCM

Clooney says his assistant bought it for him off TV like 22 years ago, to which Kimmel replied, “People who have assistants shouldn’t be Flowbeeing their hair.”

Kimmel then pointed out that a lot of young people don’t know what a Flowbee is and Clooney added, “They don’t have the pocket fisherman either, do they?”

Then Kimmel showed the old Flowbee commerical, which I do say so myself, is an all time classic and should be displayed on a loop in the Smithsonian, followed by the two of them demostrating on themselves how it works.

That is some quality TV right there, folks.