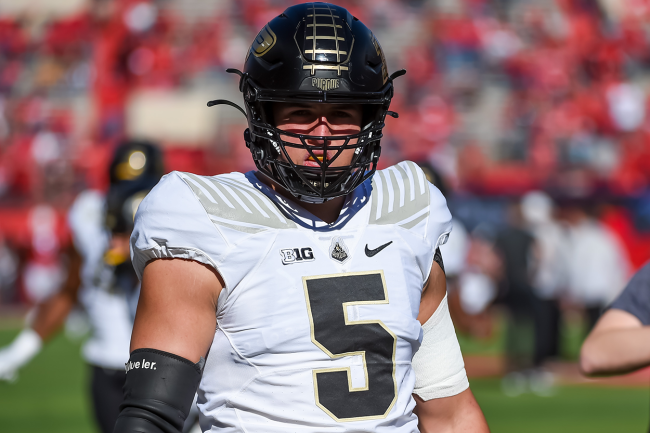 Purdue defensive end George Karlaftis is going to make an NFL franchise very, very happy. The 6-foot-4, 263-pound edge rusher is a dude. There is no other way to put it.

Karlaftis recorded 97 tackles, 14 sacks, six passes defended and three forced fumbles in 26 appearances across three seasons with the Boilermakers. Although his numbers may not jump off of the page, his intangibles make him a very moldable prospect with a lot of potential on the next level.

Karlaftis even said so himself:

“I don’t give a crap about the official numbers and that kind of stuff. The stuff we talk about internally more is like how you affect the game is the ultimate factor. How I was able to affect opposing offenses, how I was able to garner attention for myself. I had two or three blockers on me at all times, which freed up our other guys. I think that’s more significant. I think to a certain extent sacks are overrated. I know people like sacks and all that. I think the way you affect the quarterback, pressure the quarterback and affect the game is more significant. I am who I say I am. The tape speaks for itself.”

Karlaftis’ talent is only that much greater when you consider that he is still relatively new to the sport. He grew up in Greece and was a standout on the U-16 Greek national water polo team before he moved to the U.S. at 13 years old.

Despite his lack of knowledge about football, Karlaftis joined the team when his family moved to West Lafayette. Since then, he has grown within the sport and cemented himself as one of the top edge rushers in the upcoming NFL Draft class.

Although George Karlaftis was flying under the radar when the NFL pre-Draft process began, that is no longer the case.

During his Pro Day on Tuesday, Karlaftis put on a show. He also brought the drip.

If Karlaftis does not go in the top 10 come April, which is becoming a real possibility, he is expected to be a first round pick. Should he somehow slip to the second round, it would be a steal.

At his size, Karlaftis ran a 4.71-second 40-yard dash— and he did so while shirtless in 32-degree weather with a 21-degree wind chill.

Purdue edge rusher George Karlaftis running a 4.71-second 40-yard dash while shirtless in sub-freezing temperatures is all you need to know #NFLDraft 👀pic.twitter.com/4xuLzNfi3S

Karlaftis has proved himself to be faster than Aidan Hutchinson and is more powerful than Kayvon Thibodeaux. His name has fallen below the “big-name” stars in this year’s class, but he might be the pass-rushing prospect with the highest upside.

Keep an eye out for George Karlaftis. He’s a football guy, he’s a dude, and he’s coming to tear the head off of some NFL quarterbacks.