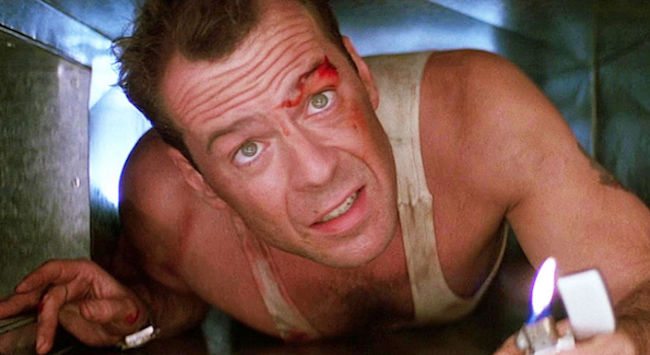 Die Hard is unquestionably one of the greatest action (and Christmas) movies ever made thanks in large part to the almost unparalleled badassness of modern-day cowboy John McClane, who was fighting the war on terror before it was cool. The film might have come out three decades ago, but you could make the argument that no one has gotten all up in the bad guy’s shit like the NYPD cop did since its release (with apologies to John Wick and Taken‘s Brian Mills).

I’ve always asked myself how I would fare if I ever ended up in a similar situation as McClane but have come to accept that the answer if “get shot in the head almost immediately.” However, Scotland’s Glasgow Film Festival is giving people the chance to get the full Die Hard experience without having to put their life on the line.

The festival will be showing Die Hard over the course of two nights to commemorate its 30th anniversary, and it appears they’re going out all to let fans channel their inner McClane before the screening thanks to a pop up that will be converting a level of an office building to a floor fashioned after one of the ones in Nakatomi Plaza.

Here’s a full description of the event from the festival’s website:

Join us in our very own Nakatomi Plaza to celebrate the 30th anniversary of one of the greatest action films ever made. McClane (Bruce Willis) and Hans Gruber (Alan Rickman) go head-to-head in this endlessly quotable ‘80s classic. Explore themed areas on the 13th floor of the Former College of Building and Printing (footwear required), sip a Die Hard cocktail, and watch out for any extra surprises. Yippee-ki-yay!

I’m guessing the pop up won’t feature a desk for people to bang on or do lines of coke off of, and I’m assuming there’s some “public safety” bullshit preventing them from letting people throw a dummy out of a window.

With that said, this is probably the closest you’ll ever get to living out your John McClane fantasy, so pick out your nicest wife beater and get ready to head to Glasgow.