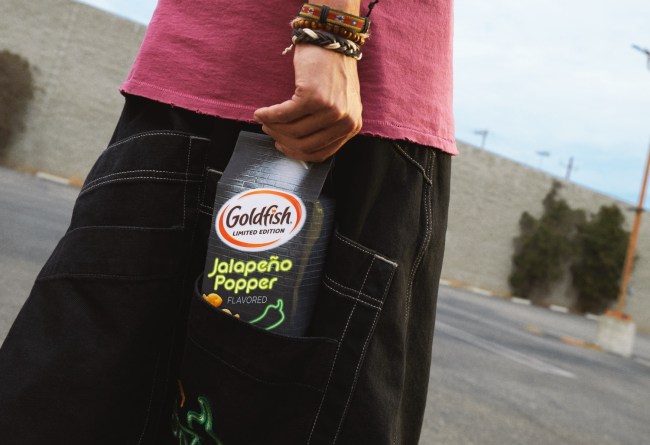 The 1990s was a decade filled to the brim with retroactively regrettable fashion trends, and it’s hard to imagine anyone who paired one of those shirts that changed colors when you sweat with some impossibly pale jean shorts containing a wallet kept safe by the chain dangling out one of the pockets looks back on those sartorial decisions with pride.

When you consider the cyclical nature of fashion dictates that everything old will eventually become new again, it should come as no surprise that certain relics of the past have begun to be embraced by a new generation. That includes the baggy pants that most people tucked away after skinny jeans became all the rage, but it would appear there’s no better time to dig around in your closet to unearth that old pair of JNCOs.

The Los Angeles-based clothing company Had A Moment a few decades ago after its laughably oversized jeans featuring equally enormous pockets embroidered with designs best described as “Ed Hardy chic” took the world by storm. However, if you missed that wave, you still have the chance to grab your board and catch a new one courtesy of Goldfish, which has teamed up with JNCO for an amazing collaboration to celebrate the return of an old-school flavor.

A post shared by The official Goldfish® brand (@goldfishsmiles)

On Thursday, Goldfish announced it’s bringing back the Jalapeno Poppers variety that graced many a lunch box in the 90s and also unveiled some amazing limited-edition JNCO jeans with pockets capable of fitting an entire bag. The only bad news is they’ll run you $200 a pair (you can also snag a t-shirt for a relatively modest $40), but can you really put a price on being the envy of every single person you grace with your presence while rocking them?

I would argue you cannot.