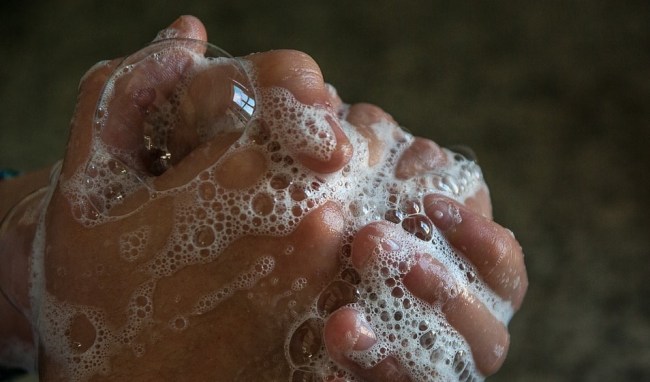 The Centers for Disease Control and Prevention (CDC) says that 48 million Americans get sick from foodborne illnesses each year, that’s 1 in 6 people, and it ruins your entire day. Those illnesses lead to 128,000 people being hospitalized and 3,000 deaths. Some of these foodborne illnesses could be because people are washing their hands wrong.

Just in time for 4th of July grilling and making potato salad, the U.S. Department of Agriculture released a study that found that people washed their hands incorrectly 97% of the time. While the concept of washing your hands seems simple enough, apparently nearly everyone is doing it wrong.

The USDA partnered up with nonprofit firm RTI International and North Carolina State University to conduct this observational study. There were 383 unknowing participants who used six test kitchens in the Raleigh-Durham region of North Carolina. The kitchens had hidden cameras to see how they washed their hands before preparing turkey burgers and chef salads. Only 3% of those in the USDA study were able to wash their hands correctly. Might want to stay away from restaurants in North Carolina.

“You can’t see, smell or feel bacteria,” said Carmen Rottenberg, acting deputy undersecretary for food safety at the USDA. I’ve eaten at Chipotle a lot in the past few years, I feel like I know bacteria. “By simply washing your hands properly, you can protect your family and prevent that bacteria from contaminating your food and key areas in your kitchen,” Rottenberg said in a statement.

Here are the five steps on washing your hands correctly.

Also, you shouldn’t use those hand dryers in the bathrooms because those are blowing fecal matter and bacteria onto your newly cleaned hands. Probably not a great accoutrement to your tuna melt sandwich.