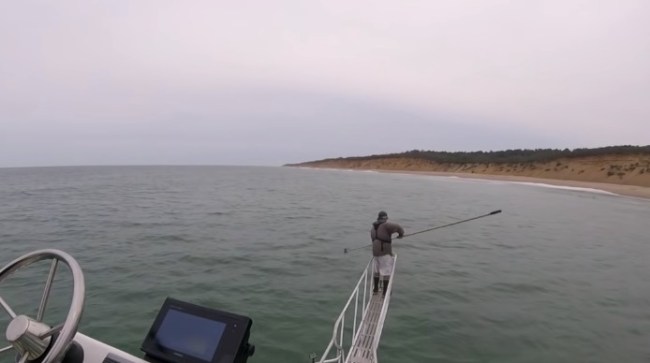 In the dog days of Summer, there’s no hotter place for Great White shark research than coastal Massachusetts. It’s unclear exactly how long this has been going on for. Researchers know that the sharks have always been around in the Summer. After all, one of these sharks was the inspiration for the movie Jaws.

The numbers of Great White sharks off Massachusetts in the Summer has exploded in recent years and this has led to some crazy sightings. Recently, a busy surfing beach in Cape Cod was closed when a Great White tore into a seal just feet off the sand and the water was stained blood red with probably 100 stunned beachgoers watching on.

That incident was certainly wild for all the beachgoers but this one below nearly caused the water to turn brown for one shark researcher. He was standing on the bow of the boat when seemingly out of nowhere a Great White Shark breaches just below him and comes within inches of where he’s standing. Keep your eyes on the man standing on the bow of the boat, the shark pops up directly underneath him:

I mean, if that’s me standing on the bow of the boat and a Great White breaches that close to me there’s a 99.999% chance I’m dropping logs in my boots.

This video was filmed in Wellfleet, Massachusetts in case you were curious.

The caption below the video reads “While encounters like this one are rare, this video shows that they’re certainly possible. White sharks are wild and unpredictable animals. This is a good reminder of the importance of not becoming complacent and always staying vigilant when in or on the water.”

I guess now is as good a time as any to be reminded to stay vigilant when swimming in the Summer.

Or you can, you know, just avoid the ocean altogether. Your call.