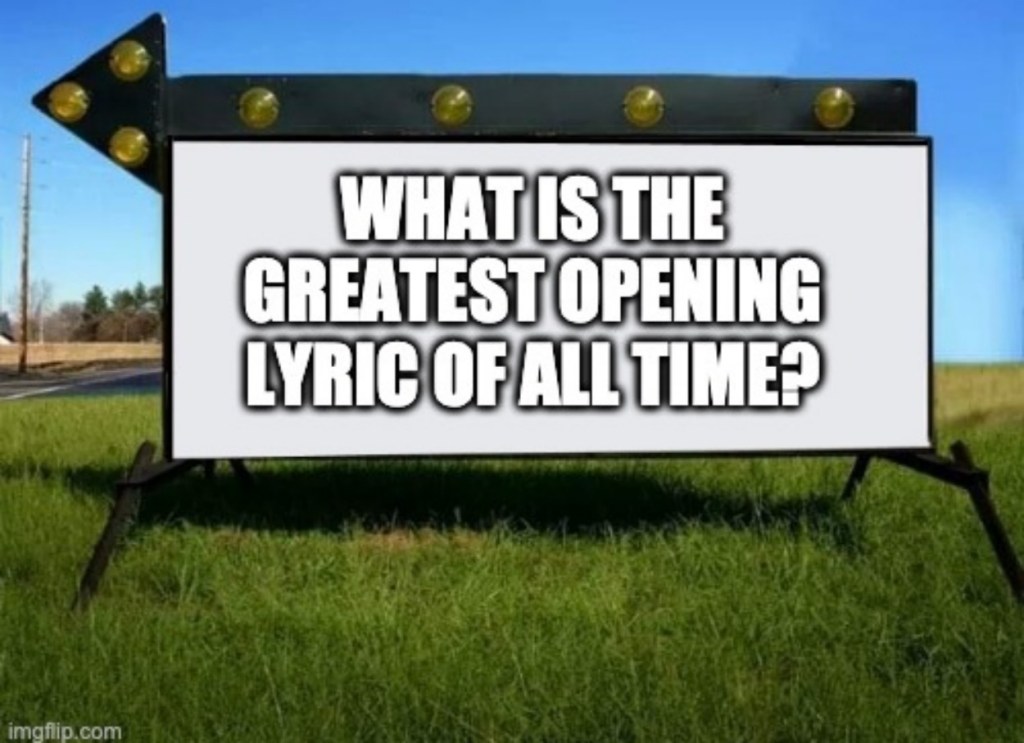 At some point on Friday night, I fired off a tweet with a picture asking ‘What is the greatest opening lyric of all time?’ and then didn’t look at my phone again until Saturday morning. When I got around to opening Twitter, my mentions were moving a mile a minute and there were thousands and thousands of responses, more than I could ever keep track of.

My choice for the greatest opening lyric of all time is Warren Zevon’s “I saw a werewolf with a Chinese menu in his hand”, the opening lyrics to ‘Werewolves of London.’ I didn’t expect this tweet to blow up with 15 million impressions (according to Twitter’s analytics) and tens of thousands of responses but it’s led to some really excellent choices.

Since we just launched the new commenting system here on BroBible I thought I’d include some of the best responses in this thread and you gentlemen could also respond down below in the comments with what you think the greatest opening lyric of all time is.

I saw a werewolf with a Chinese menu in his hand pic.twitter.com/xLkxkTcz0Z

I think the most popular responses I’ve seen in my mentions are Prince’s ‘Dearly beloved, we are gathered here today to get through this thing called life’, countless songs from The Beatles, several songs from Queen, and a few wild cards that are also excellent choices.

“When I find myself in times of trouble, mother Mary comes to me. Speaking words of wisdom – let it be.”

You get a shiver in the dark
It's a raining in the park but meantime-
South of the river you stop and you hold everything
A band is blowing Dixie, double four time
You feel alright when you hear the music ring https://t.co/6MsQAOOGPW

This one’s a no-brainer to be in the discussion.

Hello darkness my old friend,
I've come to talk with you again.

Seeing all of these responses keeps reminding me of how much I miss going to concerts. It’s probably tied with Travel as one of the things I’m looking forward to most this year.

“I met a gin-soaked bar room queen in Memphis. She tried to take me upstairs for a ride. She had to heave me right across her shoulder, cause I just can’t seem to drink you off my mind”

The Joker by Steve Miller
-Some people call me the space cowboy
-Some call me the gangster of love
(It also has one of the great lines of lyrics in a song)
-You're the cutest thing that I ever did see
-I really love your Peaches
-Want to shake your tree pic.twitter.com/A9js3FVH6n

I met her in a club down in old Soho where you drink champagne and it tastes just like coca cola
C-O-L-A,

At least a few thousand people have tweeted these ‘pretty woman’ lyrics at me since Friday night. This is definitely one of the most popular choices:

Pretty women out walking with gorillas down my street

The screen door slams
Mary’s dress waves
Like a vision, she dances across the porch
While the radio plays

she came in through the bathroom window

A long, long time ago
I can still remember how that music
Used to make me smile
And I knew if I had my chance
That I could make those people dance
And maybe they'd be happy for a while

Wake up Maggie, I think I’ve got something to say to you

Holly came from Miami, F.L.A.
Hitch-hiked her way across the U.S.A.
Plucked her eyebrows on the way
Shaved her legs and then he was a she

She says, "Hey, babe
Take a walk on the wild side."

God said "Abraham, kill me a son"
Abe said, "Man, you must be puttin' me on"
God said "No" and Abe said "What?"
God say, "You can do what you want Abe, but
The next time you see me comin' you better run"
Abe said "Where you want this killin' done?"
God said "Out on Highway 61."

This was another extremely popular choice that I probably wouldn’t have ever considered:

Well they blew up the Chicken Man in Philly last night, and they blew up his house too….https://t.co/ACRpHcngz3

This one, “In 1984, I was hospitalized for approaching perfection”, was probably the one I saw the most that weren’t just the replies. For whatever reason, people were quote tweeting with those lyrics the most.

"In 1984, I was hospitalized for approaching perfection"https://t.co/D1OqmAdQBv

Busted flat in Baton Rouge, waitin' for a train
When I's feelin' near as faded as my jeans
Bobby thumbed a diesel down just before it rained
And rode us all the way into New Orleans

Please allow me to introduce myself
I'm a man of wealth and taste
I've been around for a long, long year
Stole many a man's soul and faith

"This is the greatest and best song in the world…
Tribute."

I think what makes this so great is there is no perfect answer. My answer, as I stated, was Warren Zevon’s opening lyrics from ‘Werewolves of London’. The BBC agrees with me as they named this the best opening lyric in music history a few years back. But music is always subjective and I’m curious what you guys think are the best opening lyrics. Just drop into the comments below and login via email, Facebook, or Twitter. It will only take you two seconds to get logged in and start commenting!