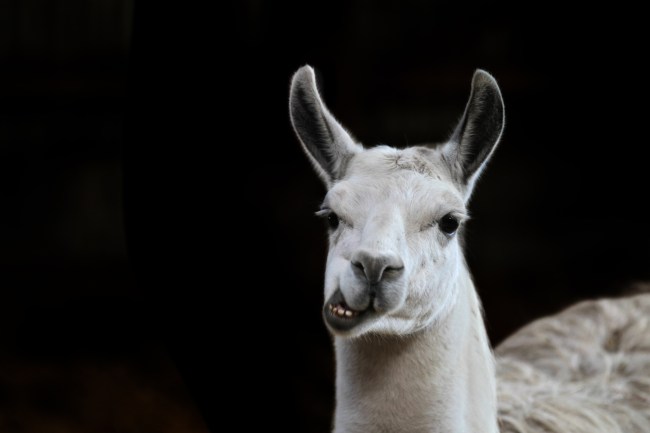 Llamas are some of the coolest looking mammals on the planet. It’s a shame we don’t have wild herds of llamas here in America because we’ve certainly got the land for them and I’ve yet to meet a person who doens’t like llamas. With that said, this dude’s sister might not be a fan of llamas after he brought one as a date to her wedding.

The 21-year-old college student first threatened his sister five years ago with bringing a llama to her wedding. The story goes that at the time, his sister was single but was already acting like a bridezilla and talking about all the things she’d want on her eventual wedding day. To poke fun at the absurdity of the conversation he told his sister that if she got married he was bringing a llama as his date.

Flash forward to the present day and he rented a llama named Shockey, put a tuxedo on it, and brought the llama to his sister’s wedding.

Mendl Weinstock, 21, brought a llama, complete with custom tuxedo, to his sister’s wedding on Sunday. He rented the llama, named Shockey, for $400 from a farm near Cleveland.

The llama stayed outside the wedding hall for about 30 minutes, taking pictures with guests. A photo of Mendl, his unamused sister and the llama racked up more than 150,000 upvotes when the college student posted it to Reddit. That made it the top overall post this week.

“I was not too thrilled. I think my face in the picture pretty much wraps it up,” Riva Weinstock, the bride, told CNN.

The gag started five years ago when Mendl Weinstock says his sister was talking endlessly about her future wedding during a car ride with friends, despite the fact she wasn’t dating anyone at the time. So, he blurted out that if he had to go, he was bringing a llama with him.

When Riva Weinstock got engaged in October, she called her brother with the happy news. Not even an hour later, she received a text that said his llama rental was confirmed. (via)

I actually live just down the road from a ‘rescue zoo’ in Florida that takes in exotic animals that people bought as pets and realized they were incapable of taking care of. They’ve got a few llamas there but it’s the handful of lions that make it such a cool zoo. When I’m walking my dog in the morning I’ll literally here lions roaring here in southwest Florida. I can’t vouch for how the llamas handle living across the fence from those apex predators but it all seems to be fine.