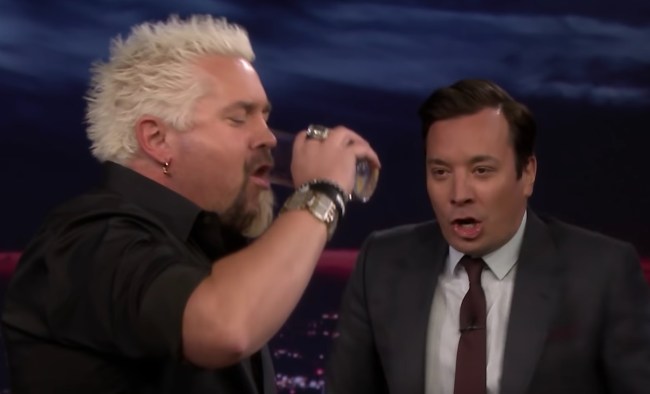 Guy Fieri has had quite the week. He was in Miami last weekend for the annual South Beach Wine and Food Festival, one of the world’s best culinary events. According to PageSix, Guy Fieri finished off the weekend by partying it up at the Fountainebleau’s Liv nightclub here he had a table next to the DJ booth where Lil Jon was performing. The night before, Guy Fieri was reportedly getting down at Miami’s Story nightclub where Lil Wayne performed…Big weekend for guys whose names start with Lil, right?

Flash forward to last night and Guy Fieri was looking fresh as a guest on The Tonight Show Starring Jimmy Fallon where Jimmy dared Guy to chug a raw egg despite Fieri famously despising them. The dude hates eggs.

He’s previously said he ate them as a kid and enjoyed them but at the age of 10 he allegedly cracked open an egg to find a whole baby chicken inside (he didn’t eat it) and shortly thereafter he ate a terribly cooked hard-boiled egg with a chalky yolk and that was enough to turn Guy Fieri off of eggs well into his adult life even though he’s a professional chef.

As a guest on Fallon, Guy discussed a now-famous Instagram picture of him hanging out Sylvester Stallone’s house for a party, getting cooking approval from Al Pacino, and that discussion ultimately led to Jimmy challenging him to chug a raw egg like Rocky Balboa.

The clip is quick and that’s what I appreciate about it because it’s Thursday and I don’t have time to be watching 25-minute YouTube videos. Seriously, who the hell are these people putting out 30+ minute YouTube videos like anyone in the world has the time for that shit?! Anyway, here’s Guy Fieri chugging eggs:

Jimmy Fallon’s ratings have been steadily declining for months and he’s getting dominated by Stephen Colbert’s show. If Jimmy wants to catch up I’m going to need to see him chug an ostrich egg on camera. These things are absolutely enormous with the equivalent of probably 20 chicken egg yolks in there. Fallon needs to sack up and take one for the ratings:

@MikeInTampa2 few months ago, ostrich egg I cooked into a frittata pic.twitter.com/8QZyVfWoTE